SUMMARY OF WHAT HAPPENED BACK IN MID-SUMMER

I was  stymied at the Uintas Trailhead with the trail closed so couldn’t go up the Roberts Pass/Atwood/Trail Rider Pass, somoved on quickly towards the Lake Fork Trailhead to attempt a trip to Tworoose Pass and the Brown Duck Basin, but as I drove in that direction from the Uinta River I was driving into ……
….”the teeth of a storm…a week of storms!”

During the next couple of days I fought “mother nature” and my “80th year aging body”  for what remained of the week…
On Wednesday, July 8th I was ready to move up the trail towards the Brown Duck Basin, with the intention of heading first to Tworoose Lake and Pass, and then backtracking to lakes in the Basin that had escaped me….as you might notice I was leaving behind my photography waist pack. 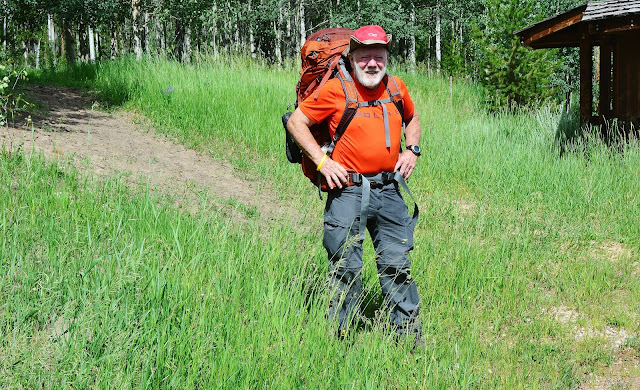 ….but as I was taking my picture, heard a booming voice,
“HEY, CORDELL ANDERSEN!”
A tough muscular outdoor type was coming my way.  He was Cale Lennberg, soon joined by his police force buddy, Tyler Lowe, both from South Jordan. 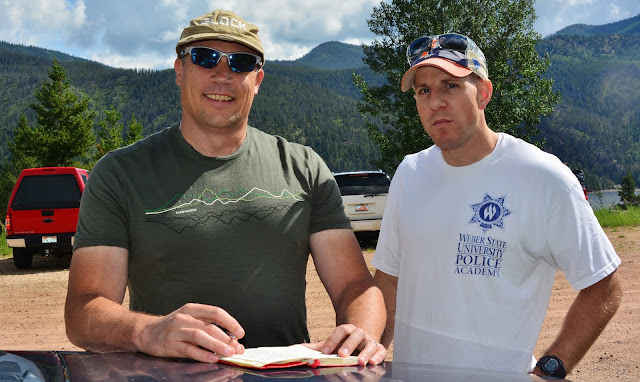 Cale wasn’t on my email list of High Uinta Friends, but he began talking about following my efforts for a while, having recently seen the
GRANDADDY reports, along with others, and talked about them having made it to CROW BASIN, etc.
They were heading up into the Brown Duck/Squaw Basin area to do similar to what I have announced in the past.  Soon they headed up the trail, and I “stalked” along behind them….soon way behind them! 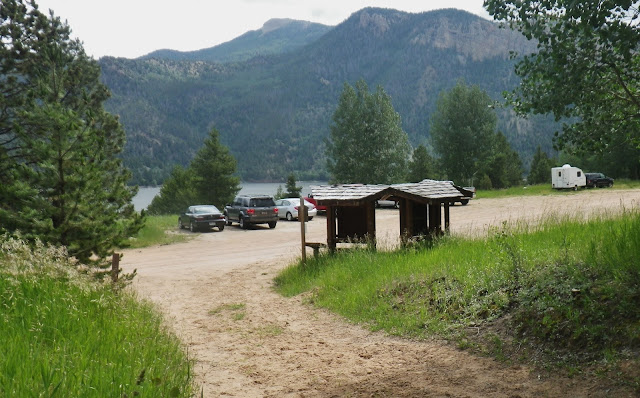 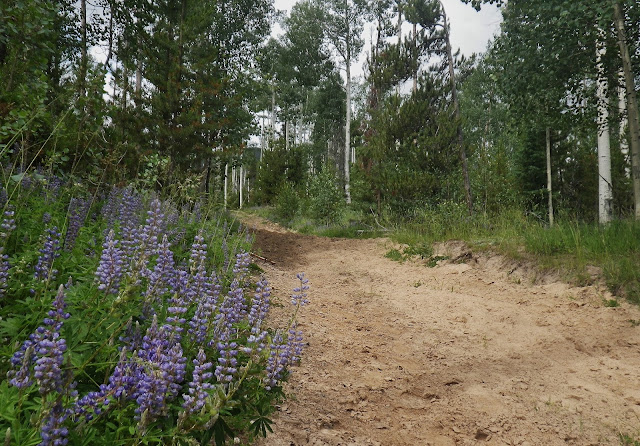 …..soon I realized that the more than 15 days off, with basically no exercise, from my Grandaddy Trip, had deeply affected my conditioning, and I was getting tired too easily and far too often.  I had reduced my load by at least 10 lbs. by not taking my professional camera equipment, but still needed to cut down more. 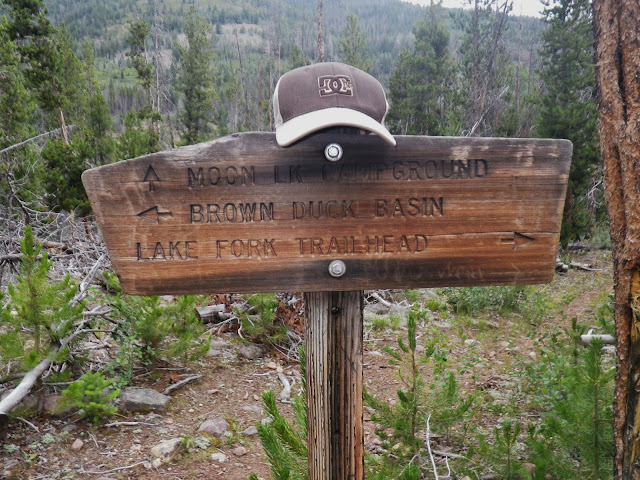 In two hours I made 2 miles to the junction where a trail comes up from Moon Lake…..and rested,  reflecting seriously about the situation. 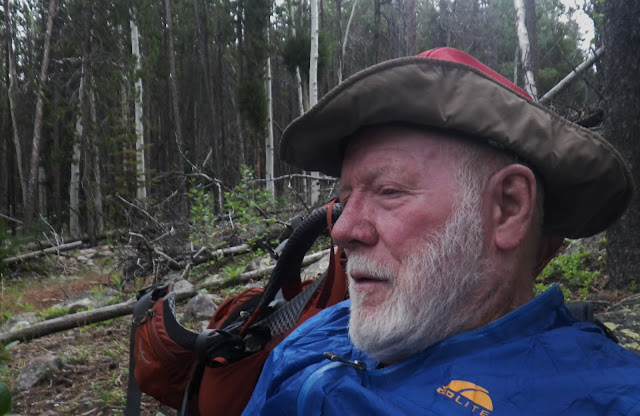 Then my thinking was influenced by drops of rain that began falling from a menacing sky….. 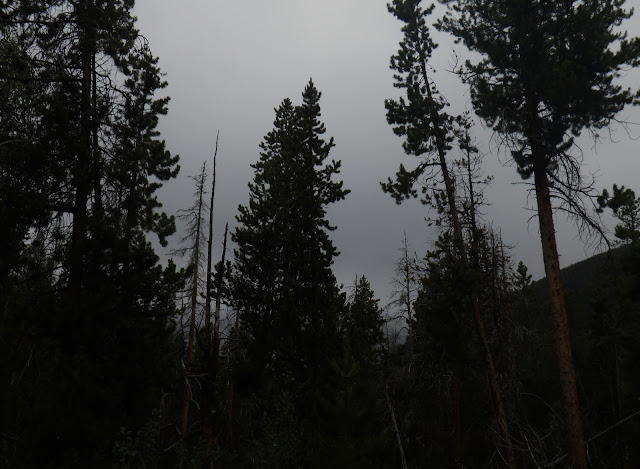 I decided that the wise course of action was to just call this day a “warm-up” to hopefully begin regaining some of my conditioning and strength. So down the trail to the Moon Lake Campground I went hoping to do the 2 miles back to the Trailhead in 1 hour, keeping ahead of the storm and be ready to try it again on Thursday, July 9th. 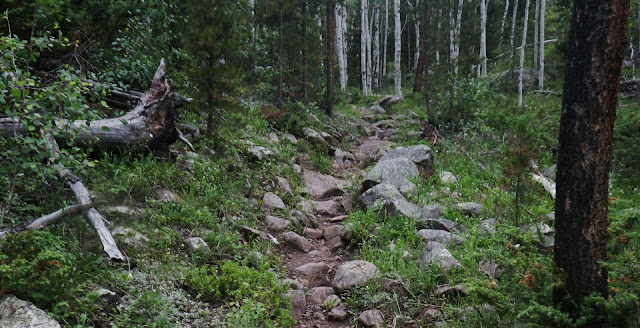 Descending this narrow trail to the Moon Lake Campground, and then down the road a bit to the Trailhead, was done quite quickly as it was all downhill, rather than the ups and downs of the main trail to that junction…
So, the next day, July 9th, I was ready to give it another try and entertained myself as I went up the trail….to keep me from thinking about being tired. 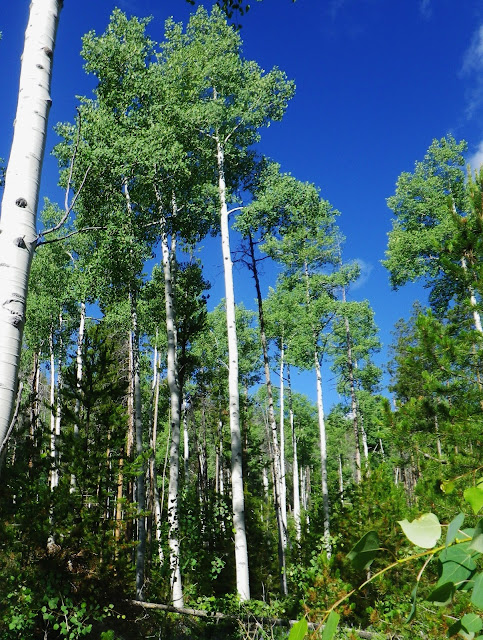 I got a good portrait of Utah’s new STATE TREE….“The QUAKING ASPEN,”……
and photographed a new flower never seen before that I think brings my total to 317 varieties of wildflowers from the footbhills to Kings Peak…. 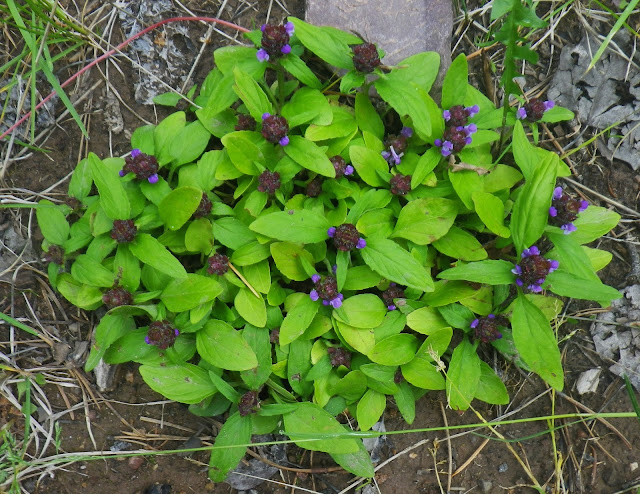 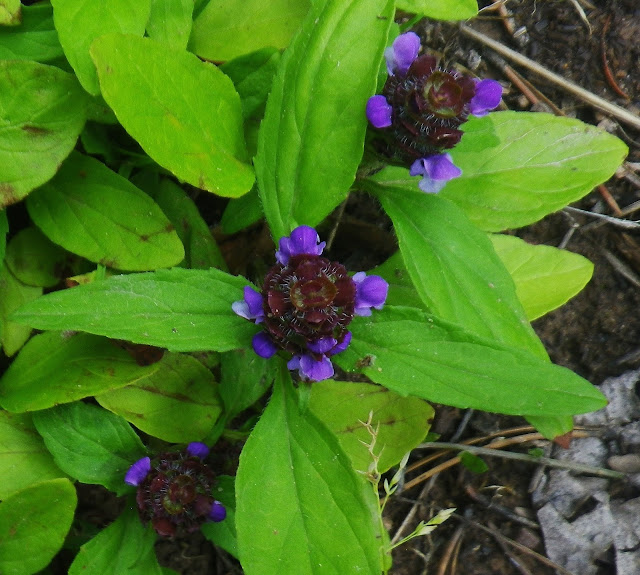 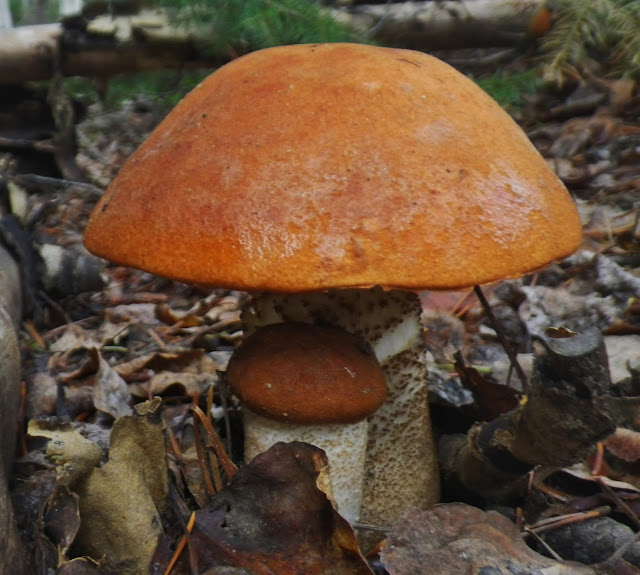 …..plus a series of photos of a great mushroom, and…
…..COLORADO COLUMBINE. 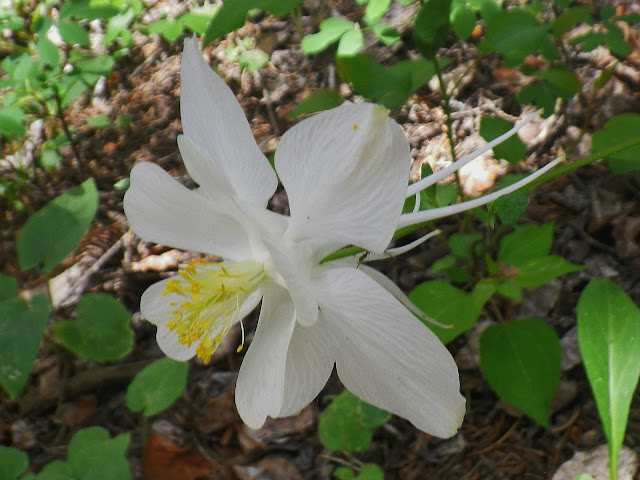 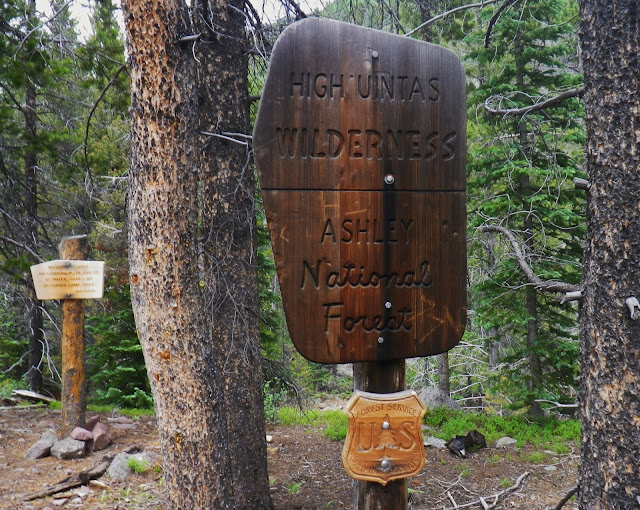 Then I came to the Wilderness Boundary about 5 miles from the Trailhead.
I continued on about to where, the “short-cut” ….”YOU SHOULDN’T TAKE,” crossed the creek  leading to Atwine Lake.  Cale had mentioned me describing  the miserable hike I had last year taking the short-cut that, apparently is one of the old trails the Forest Service has decided to not maintain anymore–so Cale  has apparently seen all of my stuff.  On trips years ago up that short-cut, it was fine….BUT NO MORE!
Near there I  looked for a piece of ground to quickly set up my tent…as the heavens were grumbling and shaking the ground with thunder and lightning! I quickly did a poor job and stuffed everything inside.  It again looked like “no water” and no “cooked dinner!” 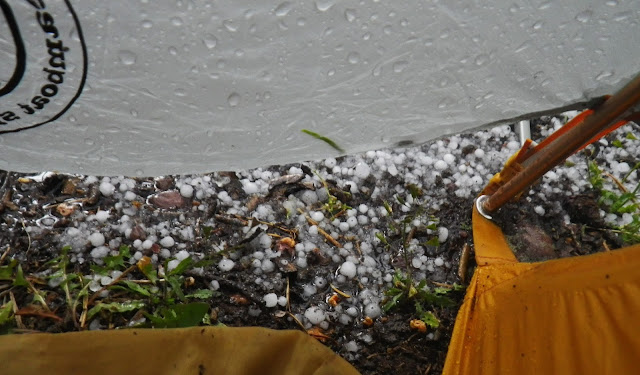 Soon the hail was pounding my tent and accumulating outside and it turned very cold.   I prepared for a long, tough night!
However, after 2 hours it stopped and the sun came out briefly before setting, and so I put the Gravity Works system purifying my water, hung on a tree used recently by a bull elk to rub the velvet off of his antlers. 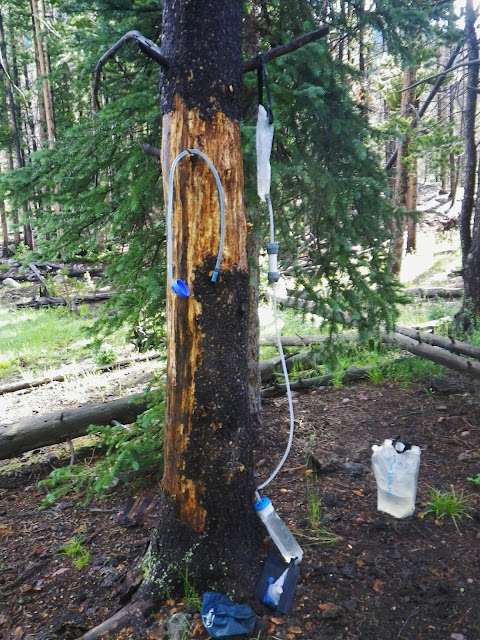 Then just barely got my dinner done when the heavens began dumping on me again, and I scrambled for the tent.
IT WAS A LONG NIGHT!
It poured down rain and hail most of the night.  I was very tired again… having done like 5.5 miles, with a load 10 lbs. less than my Grandaddy backpack, but with water it was still too much, at least for a guy in his 80th year who had lost some of his conditioning over the previous almost 20 days of doing nothing. That night I felt a bit strange….that had me wondering about the wisdom of continuing…….
On my 2nd day my body would be sore and stiff…again, and looking at my topo maps that night I could see that the next day I had to do 8 miles  to keep on schedule.  Then on my tiny radio I heard that  after a semi-clear morning the next day, the weather would likely even be worse.
I hoped at least for the rain to stop before morning, and to have 2-3 hours of good weather….as I had decided this was getting a bit too hard and wasn’t much fun anymore…and I was concerned about an apparent  change in my heart function, and realized it was about time to begin getting serious about putting this whole 13 year effort together with no need of as much backpacking as I had scheduled–the nearly 1,800 miles in 13 years was enough.

So I packed up my wet gear the next morning and headed back down the trail, then home to make my next moves….leaving the Uintas locked into a dark, stormy sky.  That night on the news snow was reported in the Uintas.
Once safely on my way home, and in my incredibly luxurious “mansion,” I finally had to conclude, as mentioned in the introduction to this post, that I just have to at least attempt that Uinta River/Atwood/George Beard Basin/Trail Rider Pass/Little Andy Lake Backpack....if it’s the last thing I do!
So, if the weather report is fairly good from Thursday, July 23rd on I should be on that trail, where I have mapped out a day by day schedule and strategy to hopefully get the job done.

One Reply to “Alternative Backpack: MOVE FROM UINTA RIVER TO LAKE FORK/MOON RIVER TRAILHEAD TO GET TO TWOROOSE PASS….met Cale & Tyler….STOPPED WITH A PROBLEM UP THE TRAIL…”