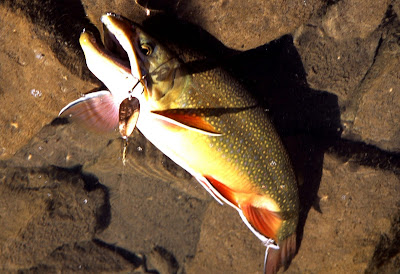 No-name lake guarded by Mt. Beard produced this brookie estimated at between 9-11 lbs.
In the Galleries section, Fishing the Uintas album I tell the story of this fish I hooked in Beard Lake near Trail Rider Pass.  The caption says:
A Utah State record breaking Eastern Brook trout!
I let the monster swim around while getting out my tripod for a good photograph, and then he was gone!  I estimate his length at between 24 and 30 inches, and heavy bodied. Let’s just say 27 inches and apply the 6.1 oz./inch that would have him weighing  10.3 lbs. or 10 lbs. 5 oz.  and a Utah State record which is 7.5 lbs.
But I would  have had to get him out of the water, then hauled 20 miles down to the Trailhead,
and 30 miles to Roosevelt to have him weighed. He had to easily exceed the 7.5 lb. Utah State record for Eastern Brook trout.
To understand the base figure of 6.1 oz. per inch go to my discussion of a large Native Cutthroat trout caught in Upper Red Castle Lake  and go forward to get the whole story.
THE WORLD RECORD
The World’s Record  brook trout was 14.5 lbs. caught in Ontario, Canada back in 1915. Click on that link to see the story.
A 29 inch long brookie was caught in Manitoba, Canada recently but apparently wasn’t weighed before being released.  See its picture clicking on the link.  The photograph makes our High Uinta’s brookie from Beard Lake look to be smaller than the 27 inches I used to calculate its weight at 10 lbs. 4 oz.
So let’s go with the 24 inch estimate that would have it weighing 9 lbs. 2 oz. and still a Utah State record.  Of course it’s all speculation since I didn’t even get him out of the water.