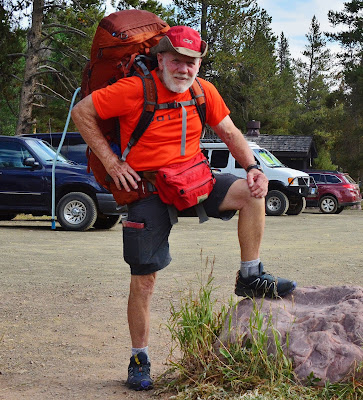 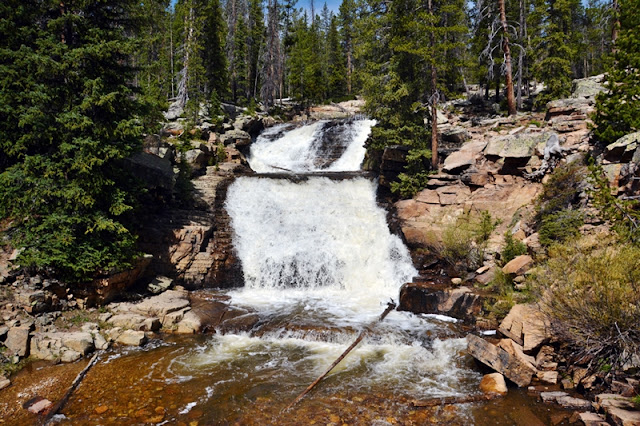 No access yet to the parking lot on Monday, June 4th, so I passed on my plan to climb the mountain.

Note:  On my return on June 6th the parking lot was accessible with one car parked, with hikers on the trail. 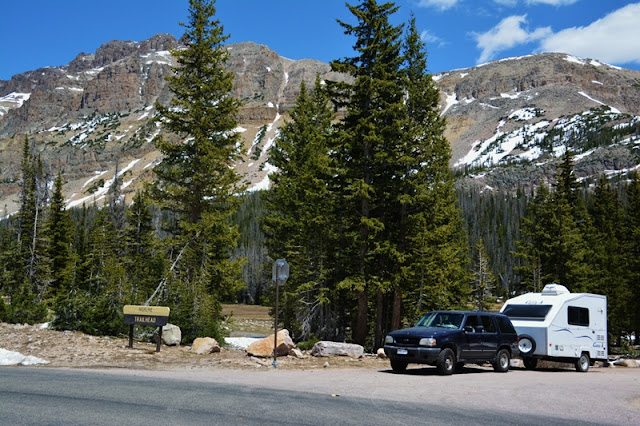 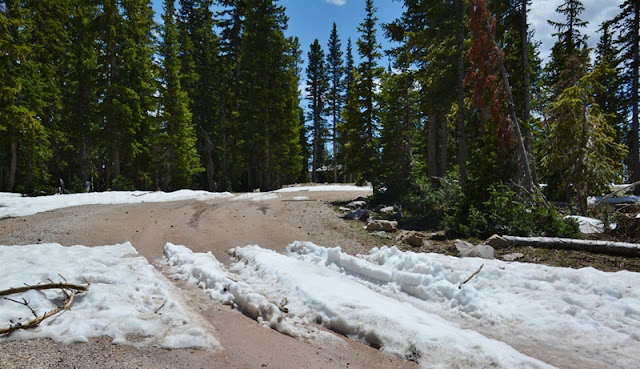 The REGISTER lists the last visitors of the 2017 Season, and 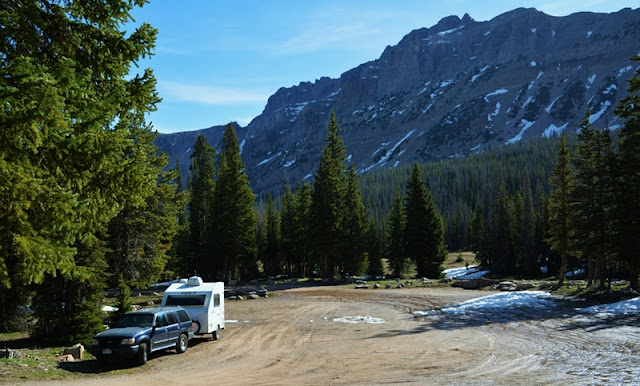 NOT CAMPING as that was prohibited.

I was rather “GLAMPING”  — Google it!

THE POINT OF THE TRIP

IMPORTANT NOTE:  As explained in my previous post (scroll down to see it), the main purpose of this trip was to check out“the reasonable capability of an old guy in his 83rd year”to still do some heavy duty backpacking, all complicated by  having suffered a serious setback during the winter of 2-3 months of bronchitis, with vestiges of it hanging on including reduced pulmonary capacity, and of crucial importance NOT BEING ABLE TO MAINTAIN MY DAILY PHYSICAL TRAINING WITH BACKPACK.  All of that on top of–as I’ve grown older having increasing problems with High Altitud Sickensss  (HAS)

I was checking myself frequently with my Oximeter--for oxygen in my blood, and with my blood pressure monitor.  BP & pulse was always good.  My normal 96 oxygen in blood at home dropped to 90  and then to 87 at Bald Pass, but normalized to 90 at Highline Trail Head (elevation 10,380 ft.).

Getting out and walking around  made a noticeable difference, feeling out of breath easily.  I never felt completely well during the 3 day trip, while up above 10,000 ft.

THE PROBLEM:  The night went badly with all of a sudden my body reverting back to the problems of bronchitis with  some coughing and a dull ache in my upper back/lung area making sleep impossible.  I struggled, but finally checked my oxygen in blood which had dipped to 82, but BP  still normal. I took one Diamox tablet, and  resorted to what I had learned helped eliminate the dull ache, taking 2 cod liver gel caps every 3 hours (as a noninflammatory).  I got through the night but it was a bad night and a bad sign for heavy duty backpacking at much higher elevations with heavy loads. 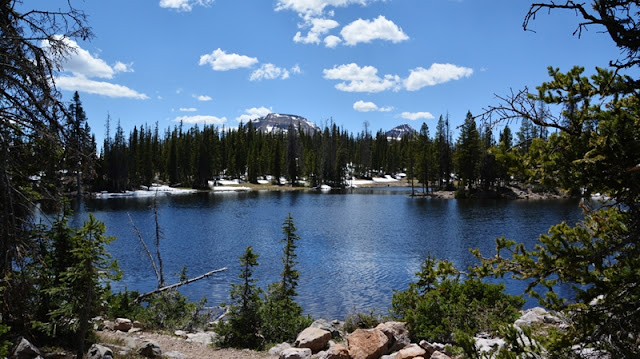 On my way back to the Pass Lake Trailhead, I did a little walking getting in a good position to photograph Butterfly Lake, with Bald Mountain & Reids Peak in the distance. 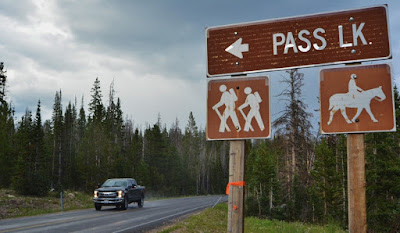 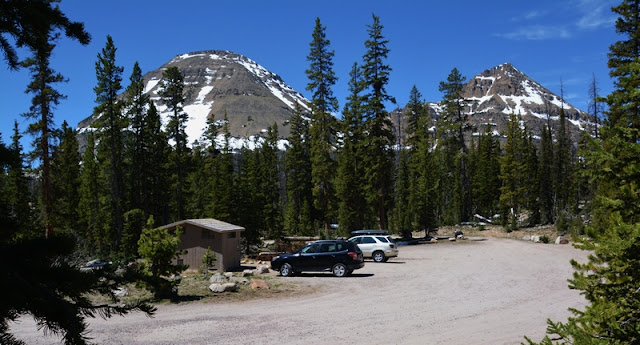 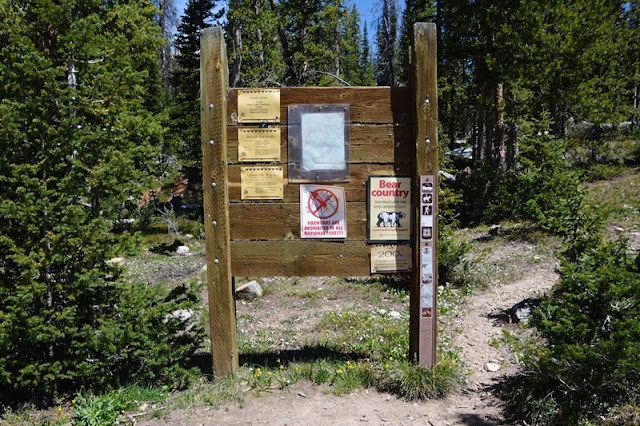 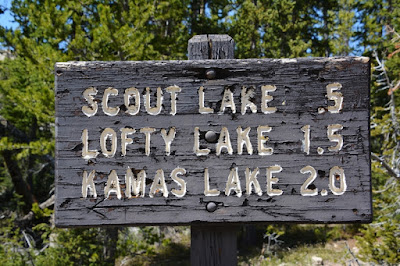 I did feel I had to do a little hiking at least–but not the overnight backpack I had thought of doing up to Scout Lake and on to Lofty, and even then swing around by Kamas Lake, but with the trouble I was having, felt it best to just do a day-hike to Scout and Lofty Lakes. I had a special reason to get to SCOUT LAKE as I’ll explain once I get there. 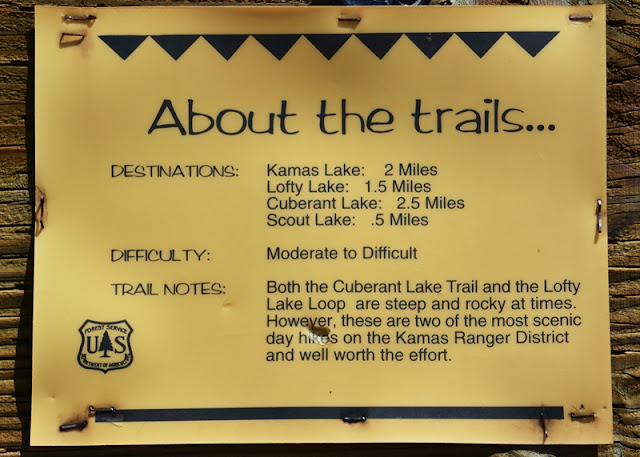 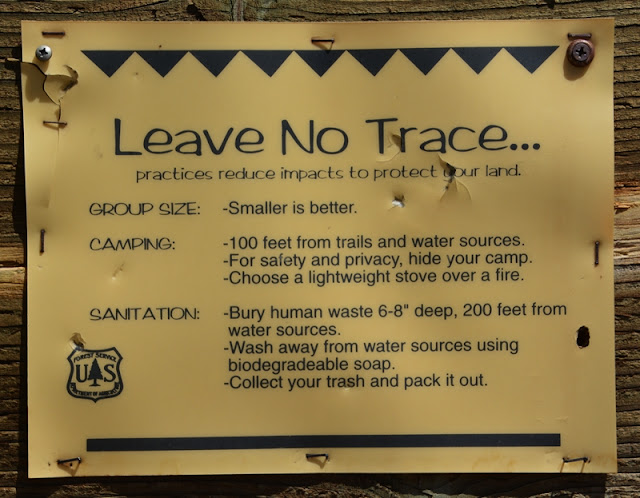 This area, west of the Mirror Lake Scenic Byway, is not a Wildernesss Area, and so, as you can see above there aren’t as many restrictions.  In the Wilderness there is a limit of 15 per group–no limit here.  In the Wilderness Area you have to camp 200 feet from water, and in most areas have to be 1/4 mile distant from lakes to have a campfire. 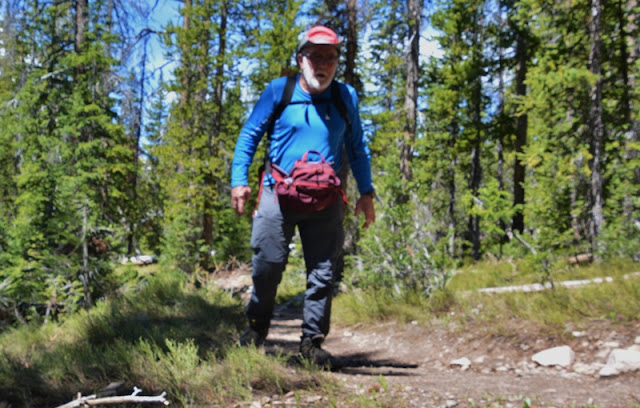 When I got to the steep part….which was the majority of the trail, I entertained myself taking pictures of the main “first flowers of the season” I’ll insert below. 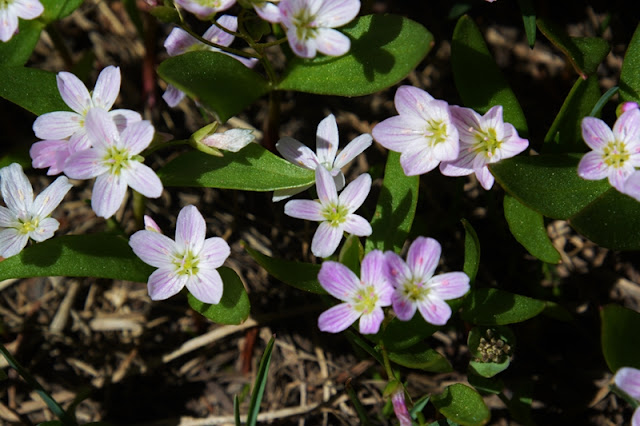 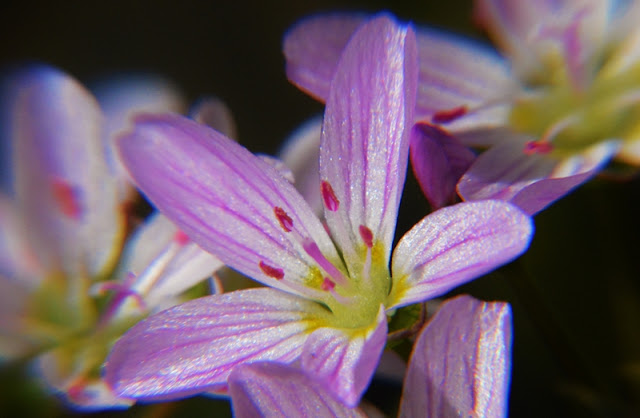 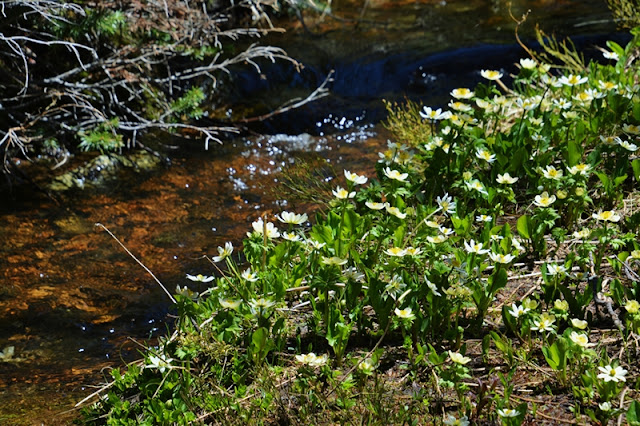 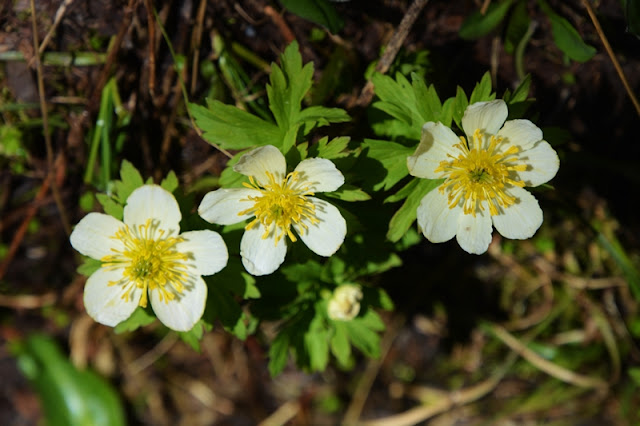 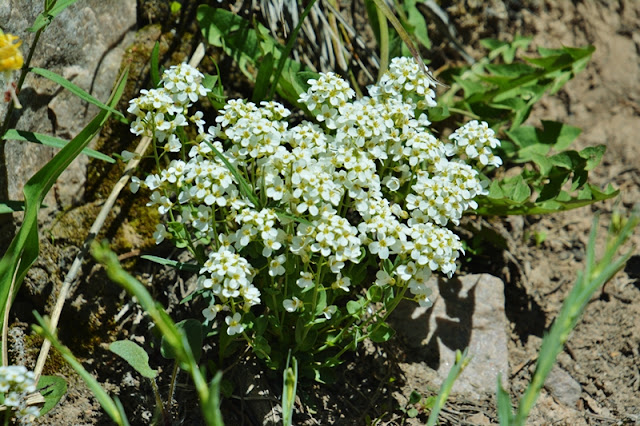 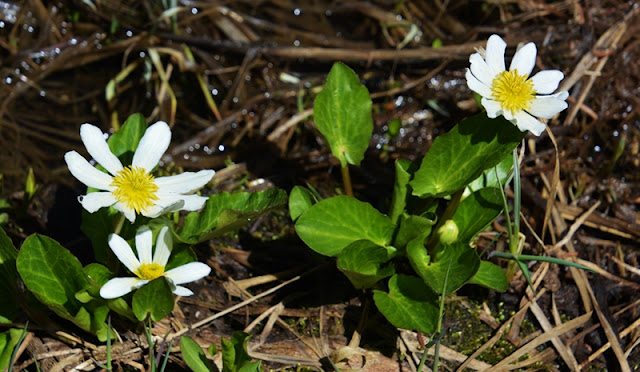 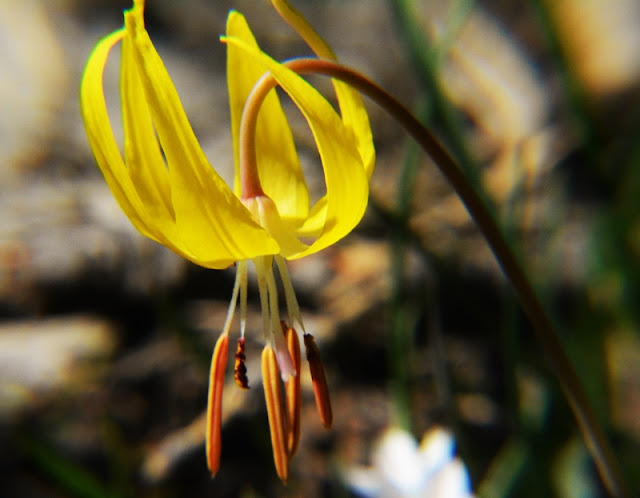 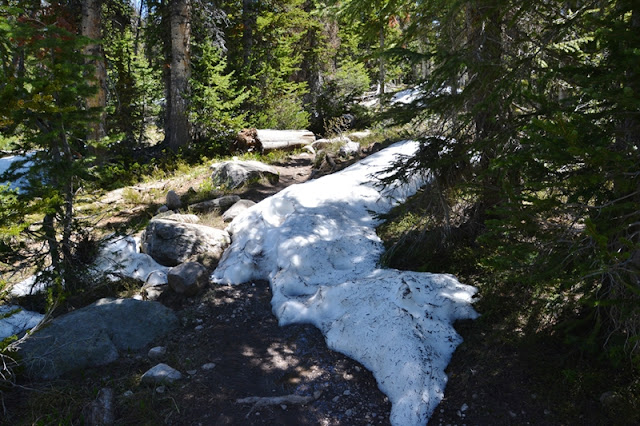 There was some snow on the trail, and other hikers told me that the trail to Lofty Lake, 10,888 ft. elevation, had so much snow covering boulder fields that they decided not to risk going on. 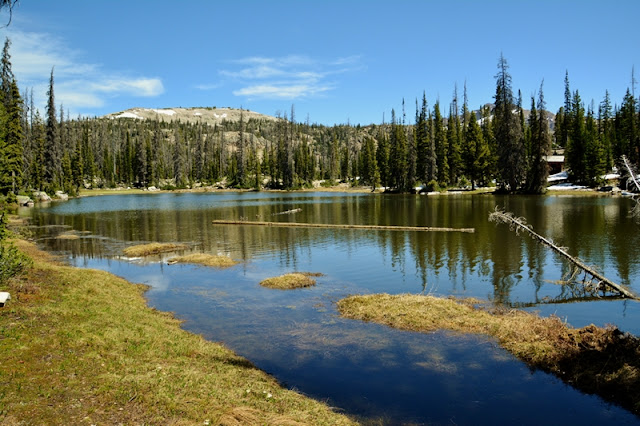 On the other side of the Lake you can see a log structure, which you see below–part of the STEINER BOY-GIRL SCOUT CAMP that is accessed from the highway a mile or so  up the road from the Pass Lake Trailhead.  Some of the facility apparently reaches the lake. 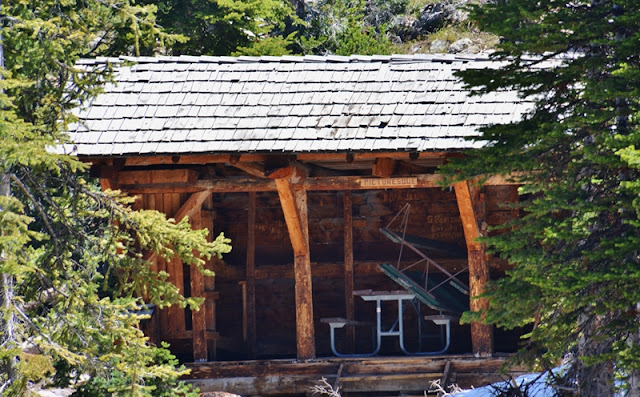 I wasn’t feeling too well, and so ignored my usual testing of the water for fish, just had my lunch and rested a bit.

Back in pioneer times in Utah there arose tales of GOLD in the Uintas–everywhere from “Montezuma’s Treasure” from the Aztecs, to a series of old Spanish mines, to the “Gold of Carre-Shinob,” and of course “The Lost Rhoades mine.”  People involved in the stories are Isaac Morley, Brigham Young,  Ute Chief Walker, Thomas Rhoades and his son, Caleb.

Eventually from 1906 when Caleb died —  until at least 1920 the search was much in the hands of  a European immigrant, F.M.C. Hathenbruck.

He rather won degrees as a medical doctor and mineralogist who migrated to the U.S.  and via working for the Army, having a Medical Clinic & Assay Office in Telluride, Colorado, another in Park City, Utah, ended up in Provo, Utah with a medical practice.  He was an expert in Indian cultures and a trusted friend of the Utes who would come all the way from the Uintah Basin to be treated by him.  He was always a  mineral seeker, had a store in Provo–he neglected by seeking for mineral riches, and in 1920 organized a serious, last ditch  effort to find the Lost Rhoades mine, but by 1928 was selling sewing machines and life insurance door to door in Provo to survive.

Backing up a bit, in about 1894 he became involved with Caleb Rhoades who needed someone the Indians trusted to gain access to Indian Reservation lands in search of the mines mentioned. In those adventures they often needed the protection of “gunfighters,” beginning friendships with Butch Cassidy and his Wild Bunch.

In 1920 Hathenbruck organized a team to come into the Uintas from Wyoming to avoid detection.  His group of  13, included 11 who were the best gunmen available–mostly connected to Butch’s Wild Bunch, plus a cook and an assayer. The leader, Caleb Landreth,  was also a self-proclaimed prophet who claimed divine guidance from a deceased Indian Princess. On horseback they followed the Bear River south, and then up Hayden Fork and over the pass arriving at their destination SCOUT LAKE, and an old cabin from which a well defined trail led up the mountain.   NOTE:  The Cabin was years later burned down by the Forest Service

There Landreth announced a vision revealing that half of what they found would be used to organize a new church, of course with him as prophet.  That created murmuring and protests in the group–not exactly the religious type.

Rock M. Pope, from Vernal began plotting to kill some of the group as soon as they found the mine. Matt Warner, who rode with the Wild Bunch, heard about it and made a plan to save them.  As they returned to camp after the first day’s search, one apparently having found rich ore, but when asked  where he defiantly told Pope to “Go to hell!”  He was promptly shot, which began a shootout, Warner shooting Pope, and by the end five of them were dead, and others wounded some never to be seen again.

Several efforts were made by survivors to return to the area and find the mine, but with no success.  Matt Warner, was  elected Justice of the Peace, town marshal and deputy sheriff at Price.  He returned several times to the Scout Lake area prior to his death in 1938, but failed to find the mine

(Information above summarized from the book, THE UTAH GOLD RUSH:  The Lost Rhoades Mine and the Hathenbruck Legacy, by Kerry Rose Boren & Lisa Lee Boren).

THIS IS JUST ONE EXAMPLE OF MANY SUCH HISTORICAL TIDBITS THAT WILL BE INTERTWINED THROUGHOUT MY BOOK ON THE HIGH UINTAS.

Now, back to my effort to determine my immediate future.

We are on the edge of the mountain south of Scout Lake, seeing Bald Mountain, and on the left Mirror Lake, which I’ll zoom in on  below. 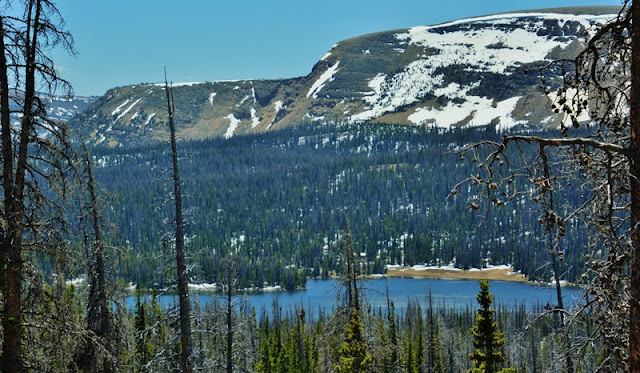 I made it back to the car safely demonstrating good balance, and  quick agile reactions on the rocky trail.  To be honest what I was looking for simply was, quoting from my previous post:

“If it seems reasonable, smart and enjoyable……”

…I would then continue with my plans.

I also mentioned being considered stubborn, my reply being, “I’m also likely dumb–like most people, but not stupid!”  So the honest truth is that as simple as everything was, for whatever reasons, it was hard, as I continually felt sort of sick in the high country, and so it wasn’t really enjoyable!

I hate to admit that because it means that for the present my backpacking plans have to be put  on hold, and I’ll dedicate more time to writing the book.

But, I will continue my efforts to work-out and get strong, hoping for being able to soon be able to say again, 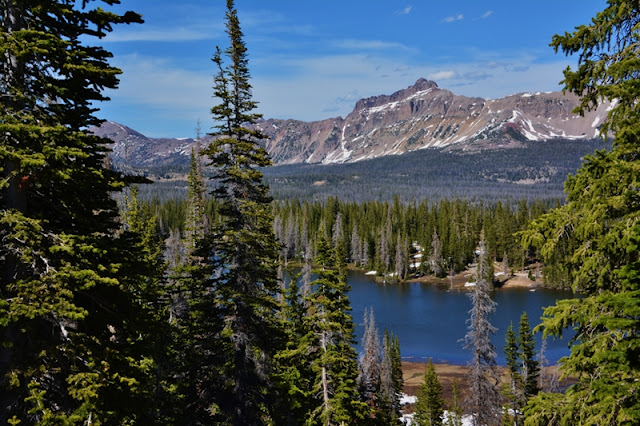 On the way home, MOOSEHORN LAKE with  Hayden Peak in the background 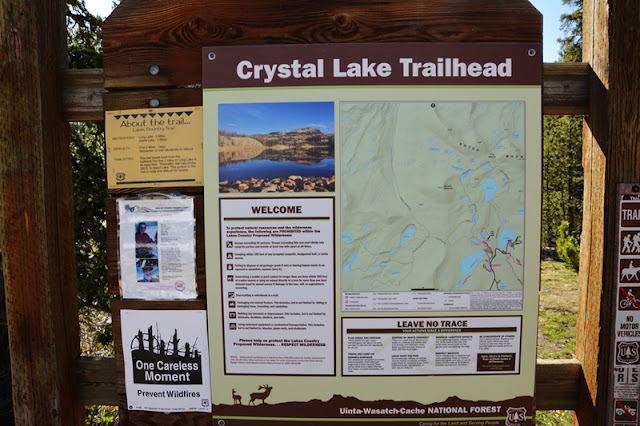 I stopped at the Crystal Lake Trailhead to see about our missing friend, Melvin Heaps.  His picture was still there as he has never been found. 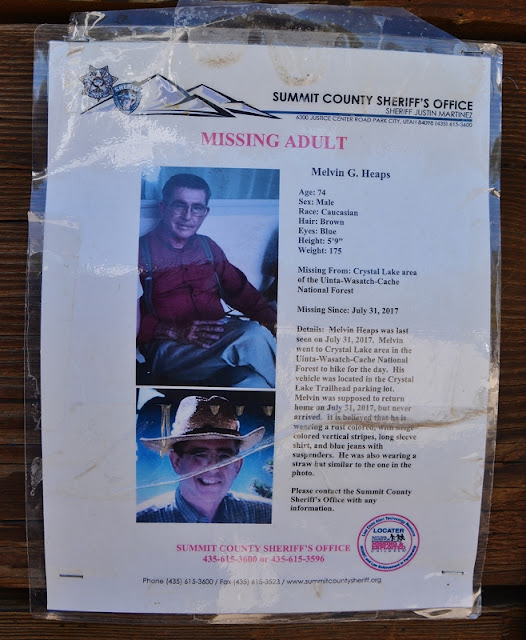 He was just going on a day hike,  but didn’t tell anyone exactly his destination.  He likely didn’t go either with the equipment he might need for bad, cold, rainy  weather, or  what he would need  to survive any  eventualities.

I pulled off  at the only  place along the Byway I’ve never stopped at and took a few pictures needed for the first section of the BOOK, entitled:

“Merrily We Roll Along”

In Our Cars Doing a 500 Mile Loop Tour of the 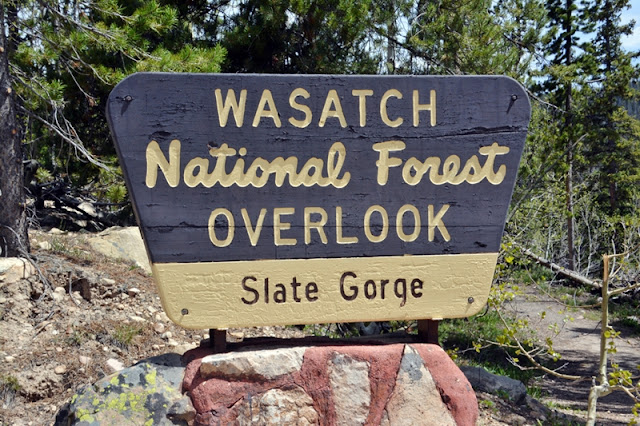 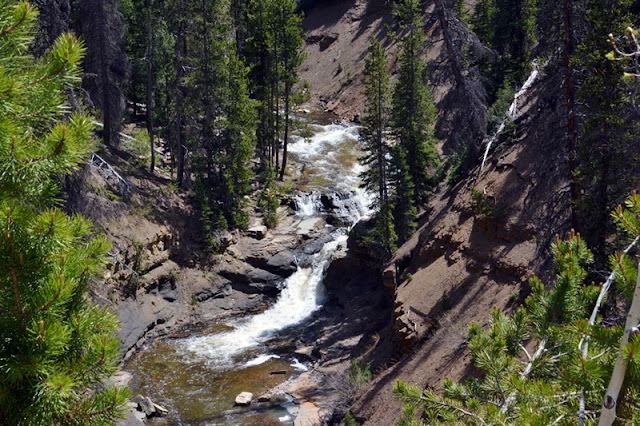 One day I’ll climb down into the canyon to try a little fishing for trout that have perhaps never seen an artificial lure. 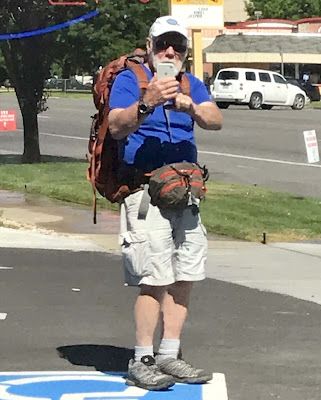