Skip to content
Link: KSL Outdoors Radio website…… podcast from Saturday October 8th
The High Uintas Project is talked about (21:00) and near end of hour (49:18) a report from Cordell
The Blog:  HIKING UTAH asks the question:
Hiked much in the Uintas? He’s got you beat  click on that to see details
This was sort of a teaser introduction for the article written by the
Tribune’s Outdoor Editor, Brett Prettyman, and published on Oct. 4, 2011.
Thanks, Brett, for doing a great job reporting on the High Uintas Project. 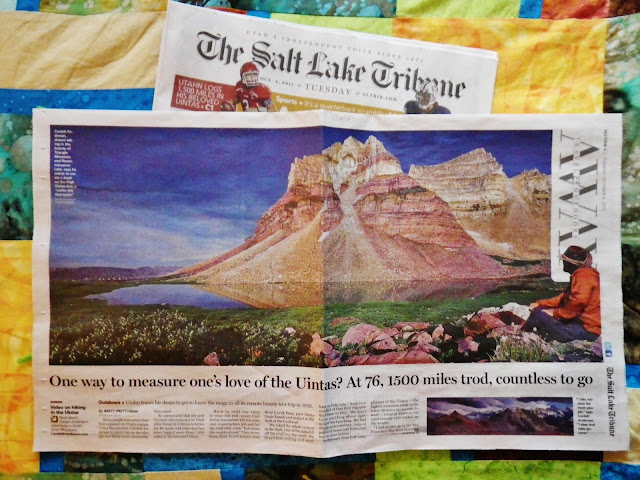 Apparently they changed the format of this section printing horizontally filling the whole page with the panorama of what some think is the most beautiful mountain scene in Utah–Triangle Mountain and Reconnaissance Lake (see it full screen and high definition at the end of this post–in several versions from dawn to twilight).  It is off-trail in the remote upper Rock Creek drainage of the Uinta’s South Slope and as far as I can tell has never been published before.  I’ll show it, and all the 13 photos from the online version of the article,  but include descriptions of each, and insert the magnificent record wild trout caught from some of them.
Click on the link below to go to the article, and then come back to see the photo album with detailed captions, Comments, and Survival discussion.
Link:  LOVE OF THE UINTAS in the Salt Lake Tribune.


Click here for COMMENTS and CONTROVERSY from the article


NOW FOR THE REST OF THE STORY
In the newspaper version they  printed two black and white photographs, which follow in full color:
NOTE:  Click on the photos to enlarge 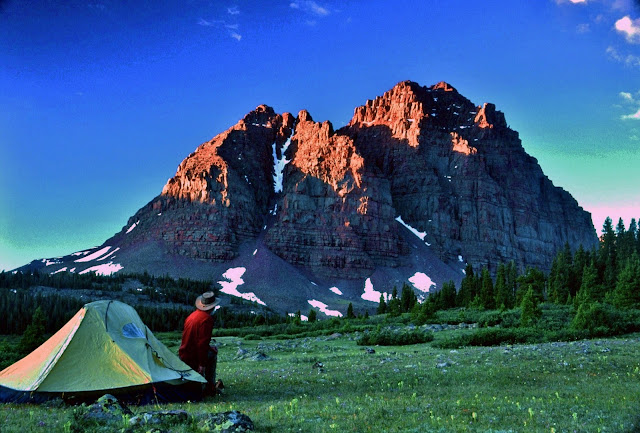 The Tribune’s caption:  Cordell Andersen takes in the beauty of Red Castle Peak in the High Uinta Mountains. Below, Andersen enjoys a meal near Kings Peak. 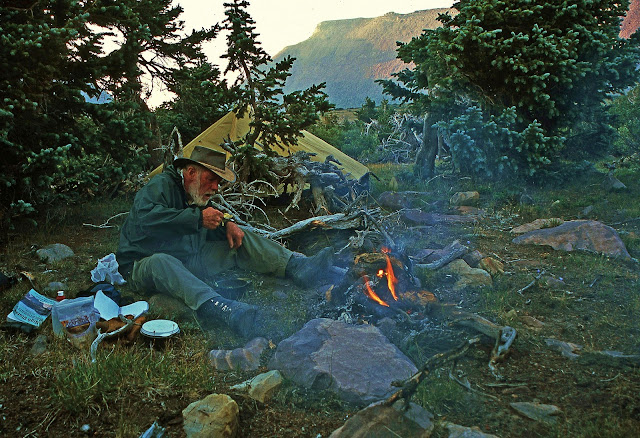 My comment:  If you  saw the black and white versions printed in the newspaper you will understand why the book I envision on the High Uintas must have mostly color photographs.
Now to the set of online photographs with captions and a handful of critical additions: 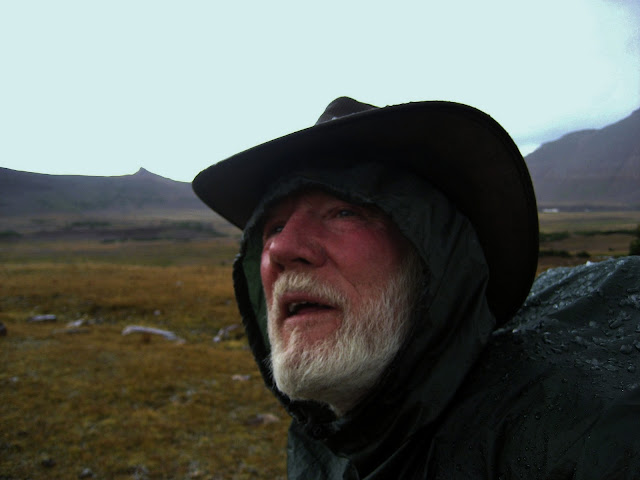 Here I am crossing the arctic tundra of the upper Lake Fork drainage in mid-September when it turned into the  survival experience mentioned in the article. Click on that if you want to learn the details.  As mentioned when up at 12,165 ft. on the ridge in the background and in need I had a satellite phone and I was talking to  Russ Smith from Skycall Satellite who “called in the cavalry.”    The cost was covered by my insurance and my 10% deductible payment.  I mention that as there were related negative comments in the Tribune’s online version.  Scroll down to see them.


Before continuing my review of the photos from the online Tribune article, let’s insert something else to set the stage for those who aren’t sure where the High Uinta Mountains are and how extensive.  First a Google Earth view showing the Uintas in relation to the Wasatch front/Salt Lake City,  Wyoming on the north, and Colorado to the east–this is impressive even for those of us who know the Uintas. 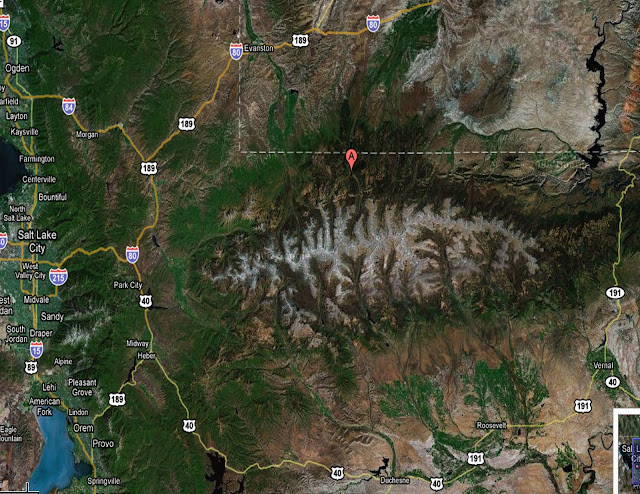 Below we zoom in on just the Uinta Mountain Range–actually the Wilderness Area, the light portions indicating the above timberline/arctic tundra  areas which you can see are very extensive–only beat by the San Juan Mountains of Colorado. 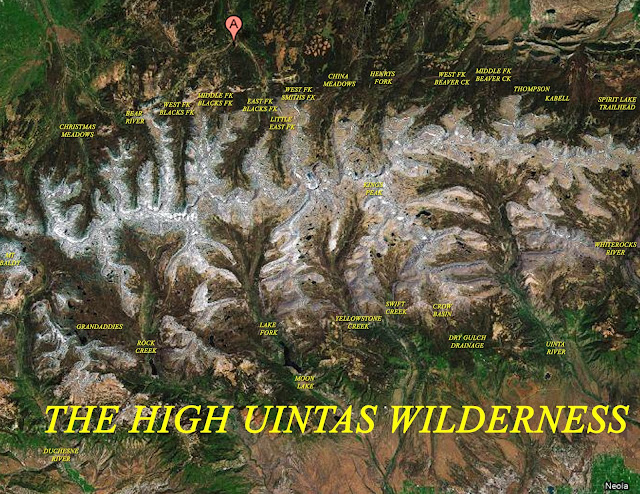 Now to the Tribune’s photo album of my photographs. 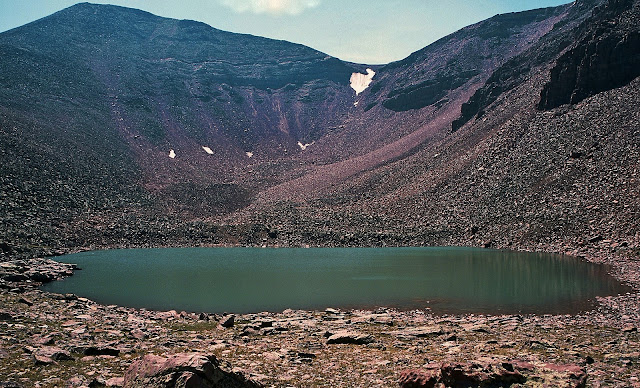 This was the  Tribune’s first of the online album.  It is actually quite unattractive unless you know some detail. Their caption is:  Beard Lake in the High Uinta Mts.
.Let me tell you the rest of the story. This alpine lake is near  11,769 ft. Trail Rider Pass,  20 miles from the nearest trailhead,  between the Lake Atwood Area and the Painter Basin–all part of the Uinta River drainage.  Above it is a no-name 13,247 ft. peak I call Beard Peak.  To our right are the slopes of  the 13,387 ft. mountain I have named Mount Jedediah which I’ll get to in a moment.  Here, in what some maps designate as lake U-74,  a giant  hooked jawed Eastern Brook trout you see below grabbed my Thomas Cyclone. 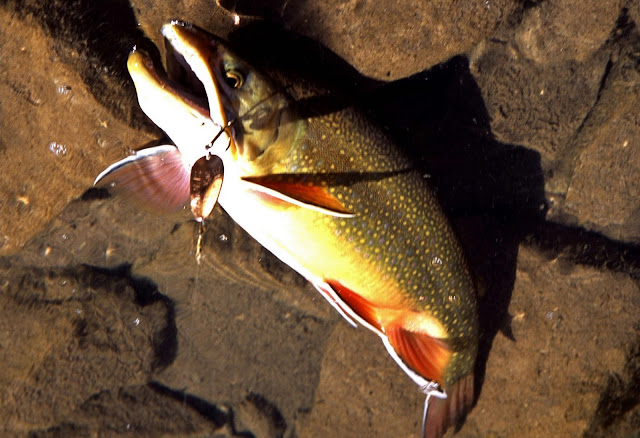 This brookie’s body descends down  into  transparent water about 3 feet deep.  I let him swim around while getting out my tripod for a good picture of what I knew for sure was a new  Utah State record by several pounds, but then he was gone.  So we’ll never know for certain but his length was estimated at between 24 and 30 inches which would have had him weigh from 9 to 11+ lbs.  The Utah State record brookie weighed 7.5 lbs. from the Boulder Mountains.  Whatever his weight might have been this brookie shows that the Uintas don’t have to play second fiddle to any other place in America.  Click on the following  link for a discussion on the world record brook trout. 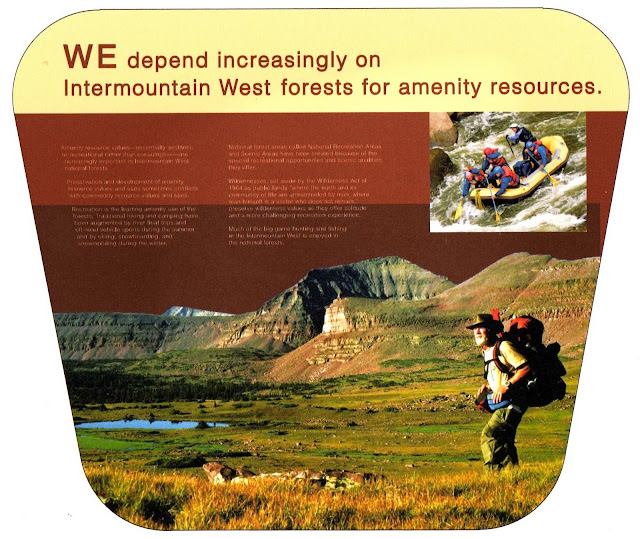 This is a little different version of the same picture in the Tribune album, composed and used by the High Desert Museum of Bend, Oregon for one of its displays.

My caption for this picture in my Lightweight Backpacking article refers to my 27 day expedition.  It is:  Pumped up on the 11th day heading for Crater Lake.  Equipment and food weight down to around 67 lbs. with a much stronger body. Believe me that doing this was about the most invigorating thing I have ever done in my life. But, no matter what your age, you shouldn’t attempt this without proper training and planning. Remember I trained for it for years, jogging daily, running half-marathons, and 2-3 times a week hiking 4 miles around the rolling hills of my farm in Guatemala with a 100 lb. bag of fertilizer on my back.  Without this I would have never been able to do what I did–and enjoy it. If you’re not willing to pay the price, don’t attempt anything similar.
In the center of the image is Explorer Peak and in a glacial cirque at its foot is found Crater Lake you see below.

Beautiful Crater Lake, the Uinta’s deepest at 147 ft., is another of the most inspiring spots in the Uintas, but which again is not shown in any of the books on the Uintas.  I still have the vision of the ultimate photo of this scene being taken from the ridge on the right with a wide angle lens capturing the lake and Explorer Peak.  I still hope to bivouac up there for that “perfect shot.” 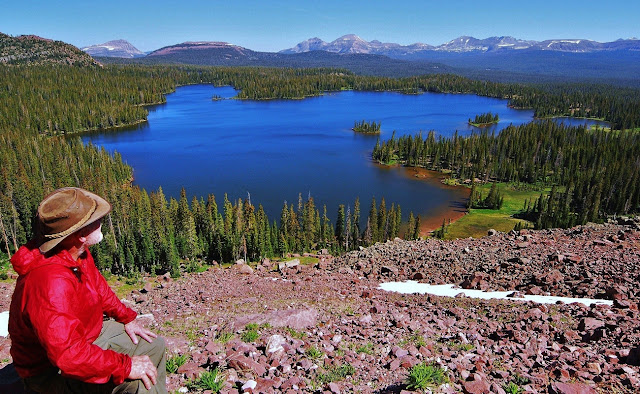 From the deepest, we go here to the largest lake in the High Uintas, Grandaddy Lake, one of the 26 lakes in the Grandaddy Basin, with well known mountains in the background:  From the left, Mt. Baldy, Hayden Peak, Mt. Agassiz, and Spread Eagle Peak.

With winter approaching in mid-September I got this panorama of the backbone of the High Uintas from 12,165  ft.* East Fork Pass (my name) at the head of the East Fork of Blacks Fork, with 13,219 ft. Mt. Lovenia out of sight far to our left, then Red Knob, in the distance to the right Mt. Beulah, and last  at the edge of the image  the slopes of 13,165 ft. Tokewanna Peak. *Note:Previously on my website I stated that East Fork Pass was 12,300 ft. but I have corrected myself. 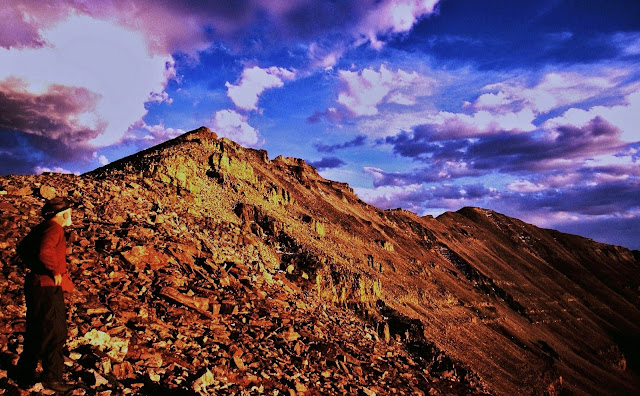 Here I’m viewing at sunset Utah’s highest mountain, 13,528 ft. high Kings Peak.  One of my captions for this scene is:
KINGS PEAK as the setting sun turned it to gold, so far the only gold I have found in the High Uintas.
This photograph was taken on the “survival backpack” as explained a bit further along and in the BACKPACK LIGHT and SURVIVAL segment where the image of my bivouac camp is also featured. 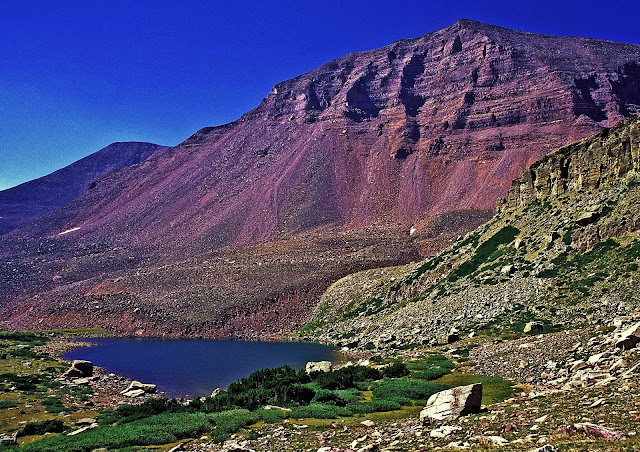 Down the ridge south of Kings Peak we come to Mt. Jedediah that guards no-name U-75 lake where on my 27 day expedition I caught the  large brook trout seen below.  The 13,387 ft. high mountain, 5th highest in Utah, was (unofficially) named by me for who I think was the most outstanding of the explorers and mountain men of the west, Jedediah Smith. In my Crow Basin trip report I added about him:  Smiths Fork, born in the Red Castle area on the North Slope, is also named in honor of Jedediah Smith, who along with his men first trapped the North Slope in the 1820’s.  “Diah” as he was sometimes affectionately called was a giant among those early explorers different in that he carried (and read) his Bible, did not swear, nor drink and refused to have to do with  women of ill repute. 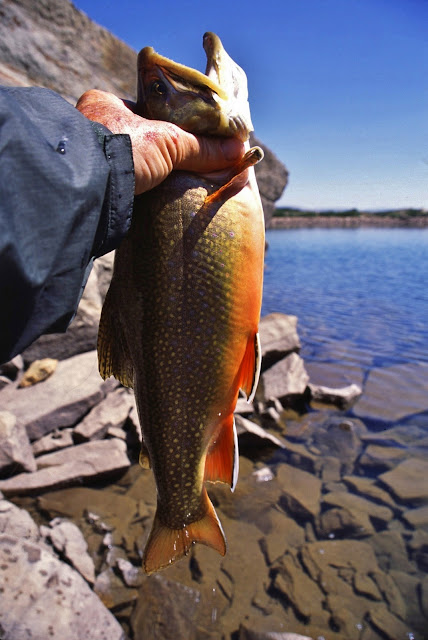 Here I insert another image related to no-name U-75.  This fat brookie was 17 inches long and from 5-6 lbs.  To arrive at that estimate I based the calculation on an 8 lb. cutthroat that was 21 inches long.  Click on that  and then the following to see the math logic involved. 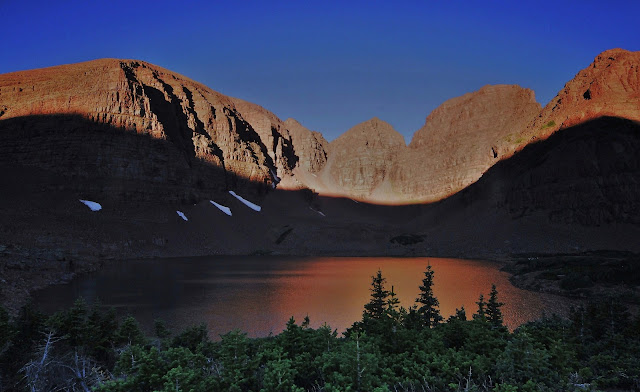 11,130 ft. high East Red Castle Lake guarded by the multiple Red Castle Peaks was also another of those remote lakes that produced larger than normal native cutthoroat trout as you see below. 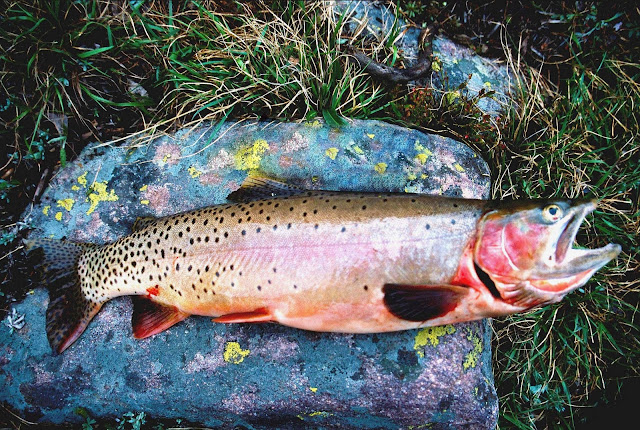 For more information on FISHING THE UINTAS, click on that link. 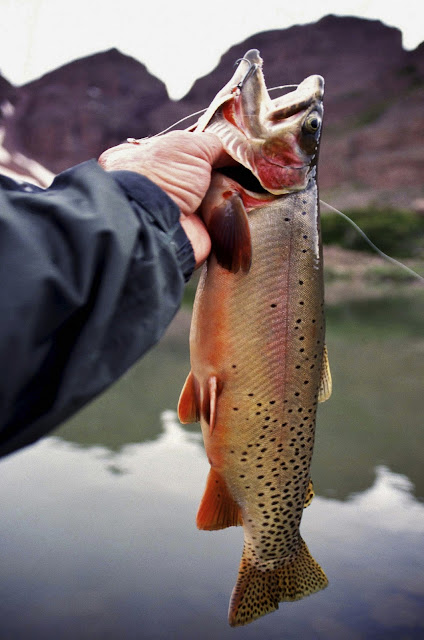 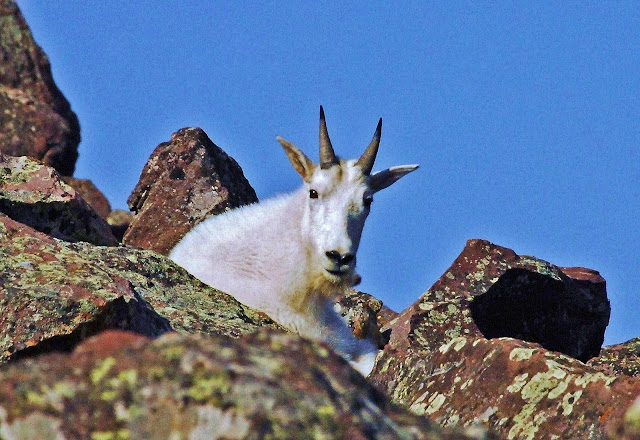 Young Rocky Mountain Goat on East Grandaddy Mountain. For photographs of most of the Animals of the Uintas, click on that link.  Go to the GALLERIES page to see  Mountainscapes,  Wildflowers, Origen and Rocks, Uinta Friends, etc. 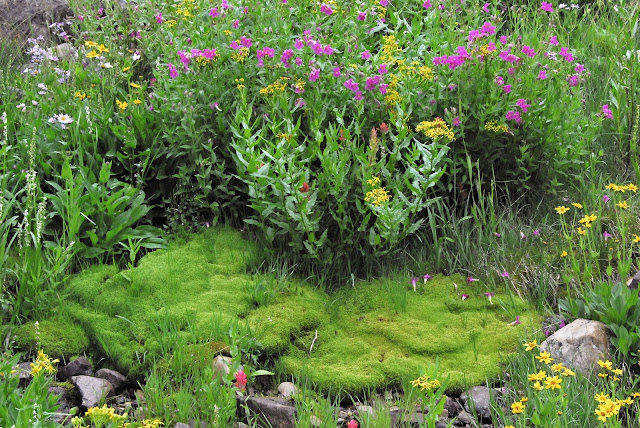 This shot will have to represent the continually growing collection of wildflowers.  As soon as I have time to update the Gallery album with the new varieties I’ve photographed the total will likely surpass 250.
The Tribune article also mentioned my exploration and research on the “tie hackers,” without whom the West wouldn’t have been won.  My 7 photo essays on them can be represented by the opening page of one of them seen below.  Links to all of them can be found on my Articles page. 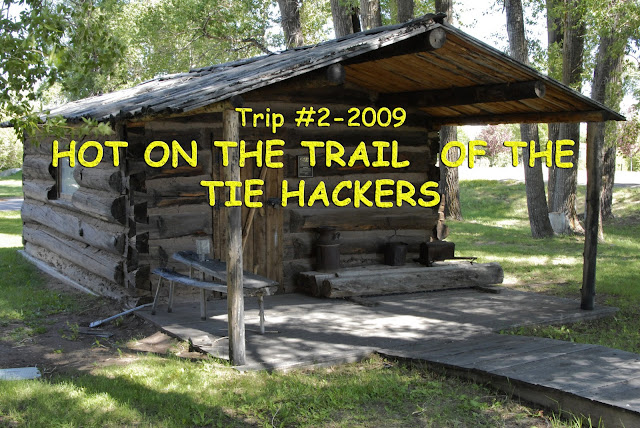 There is some exciting and fascinating history related to these incredibly tough guys who worked 12 months a year in the Uintas.  Check out the reports, one of which is represented below in a 1867 photograph of one of their ghost towns–Beartown, described as “the liveliest, if not the most wicked town in America.”  It grew to 2,000 people in 2 years and then disappeared like Sodom and Gomorrah.  I found the exact spot as seen in the photograph below.  This relatively unknown story will be part of my book. 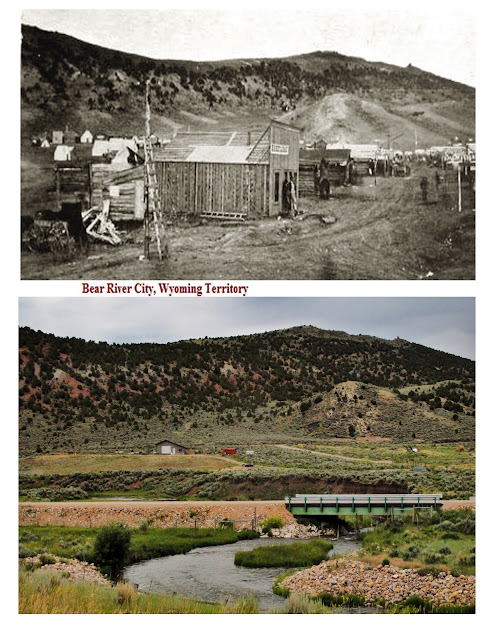 We now come to the full page spread in the Tribune article.

We end where we started with this beautiful scene of Triangle Mountain and Reconnaissance Lake.  I will not hang up my backpack until I can experience live one more time this incredibly inspiring corner of God’s great creation.  Below see other views  from daylight till twilight. 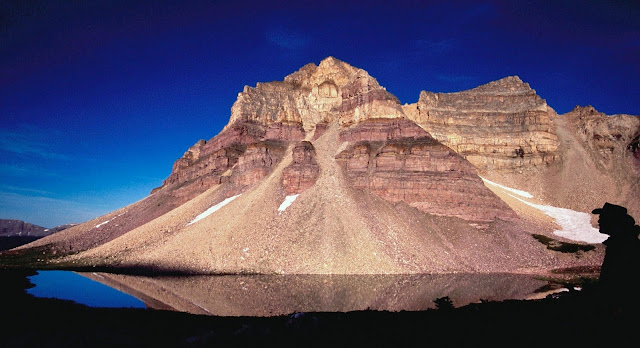 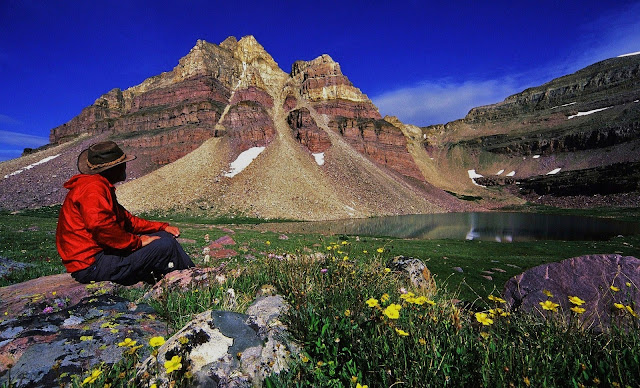 In my 3 visits to the area I’ve never seen another human being and always had a truly wonderful wilderness experience. 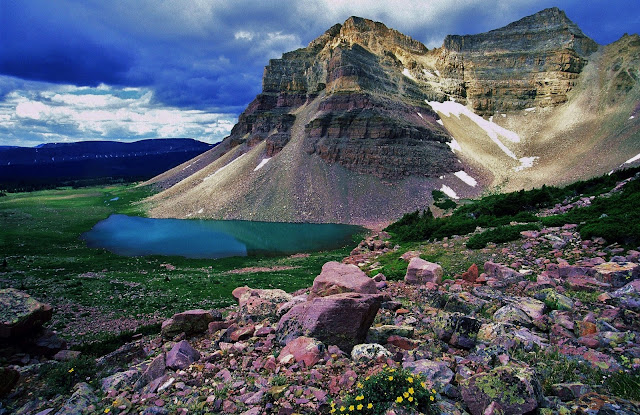 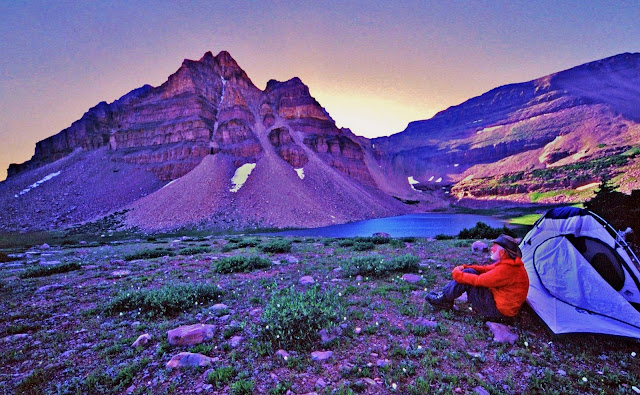 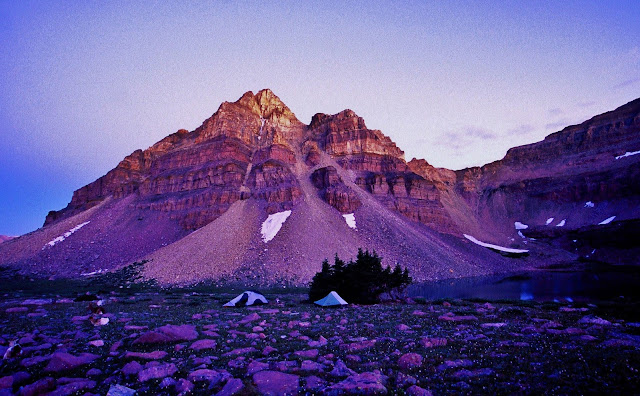 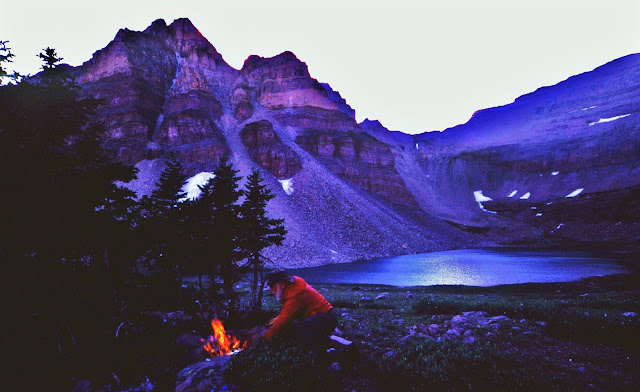 Click here for COMMENTS & CONTROVERSY from the online Tribune article.


Click here for related SPOT TRACER DEMO and SURVIVAL issues  from the article.