— THE HIGHLINE TRAIL — PROPOSED BACKPACKS FOR 2017—

GRANDVIEW TRAILHEAD …“Gateway to the Grandaddies” UPDATE Monday June 19
Just talked to Jeff at the Duchesne Ranger Station who reports that the gate is still locked and closed to backpackers/horsemen due to the timber sale, and won’t be open until approximately the end of the month–he will email me and let me know when open, and I’ll immediately report it here.
In the meantime, get some exercise to be in shape, as I’m doing now in my 82nd year, with a daily mini-hike with backpack, today with 51 lbs. of load, & also  boots that  are 7 oz. each heavier than the ones I’ll use backpacking–once again helping my body be stronger than otherwise might be the case.
NOTE:  If you don’t think 7 oz. per step less  is important, consider the following:  In 10 miles it adds up to 8,750 lbs. less weight lifted with your legs!
***************************** 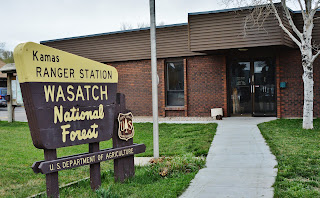 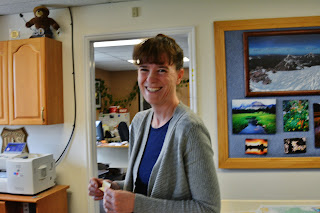 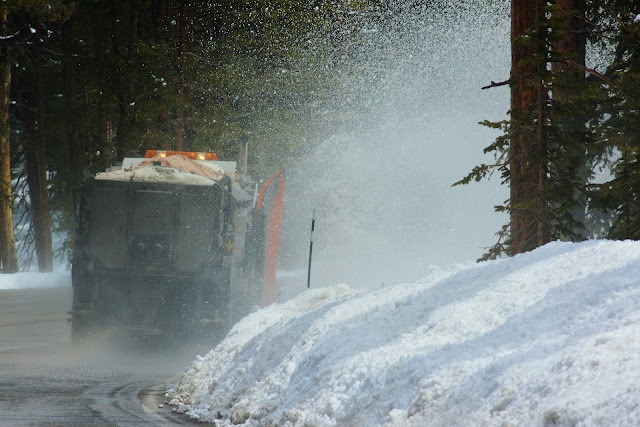 Following is my photo report of the trip I made this morning, Friday, June 2, 2017 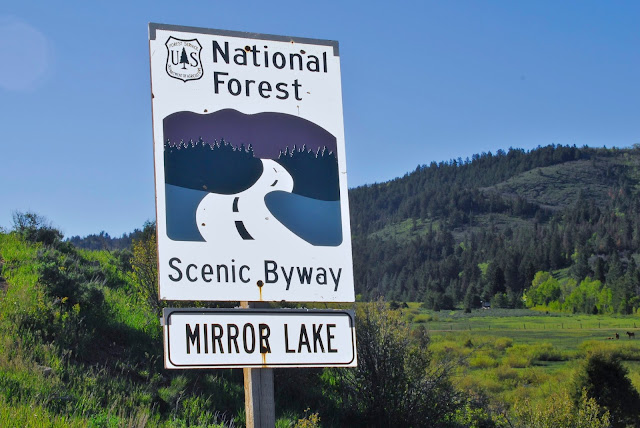 If you know me, you’ll expect me to take you with me, with a few views along the highway on the 80 mile round trip from Kamas with little comment. 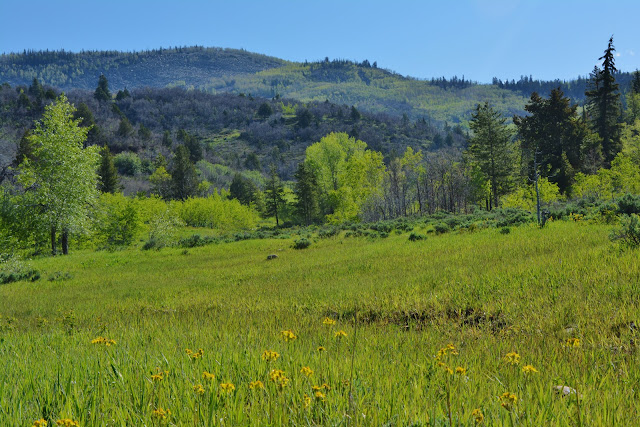 SPRING IN THE UINTAS 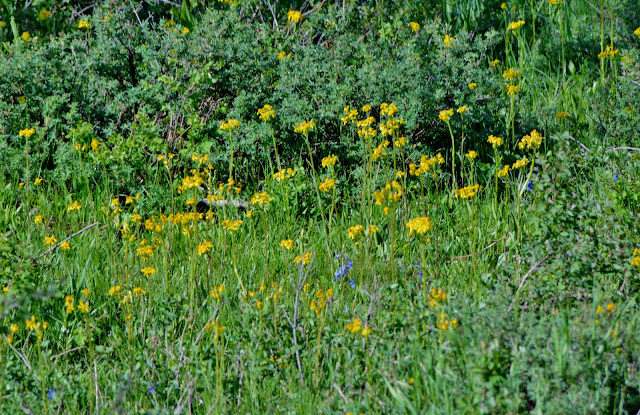 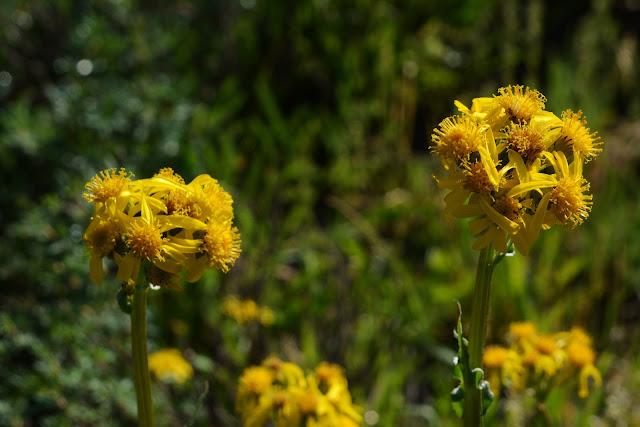 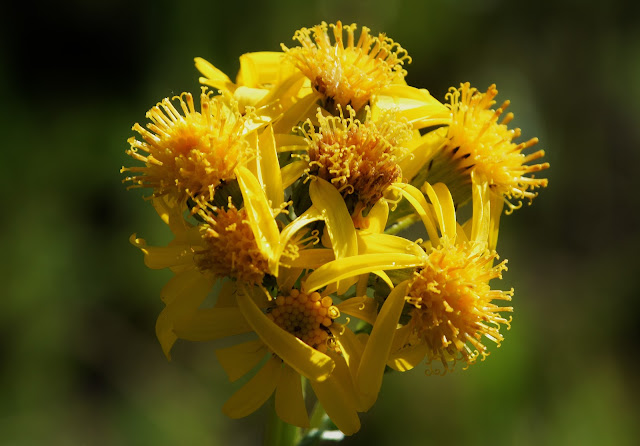 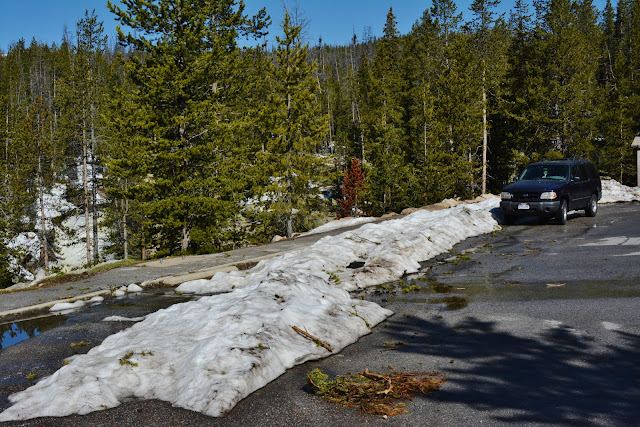 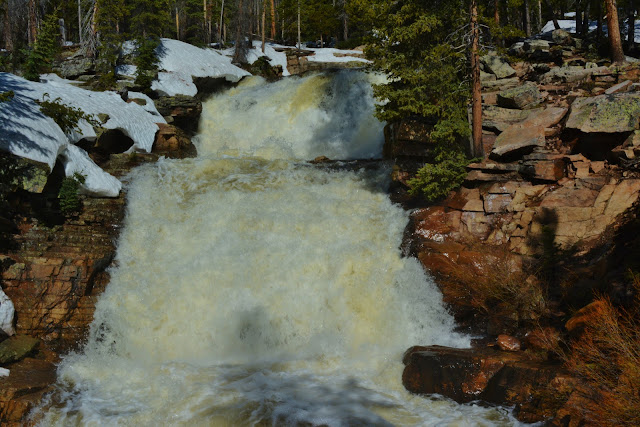 Below is a view of the Falls on June 4, 2016, shown with the shadows of the afternoon. 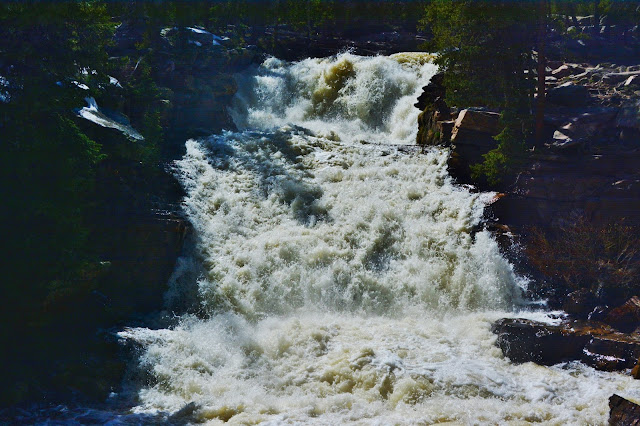 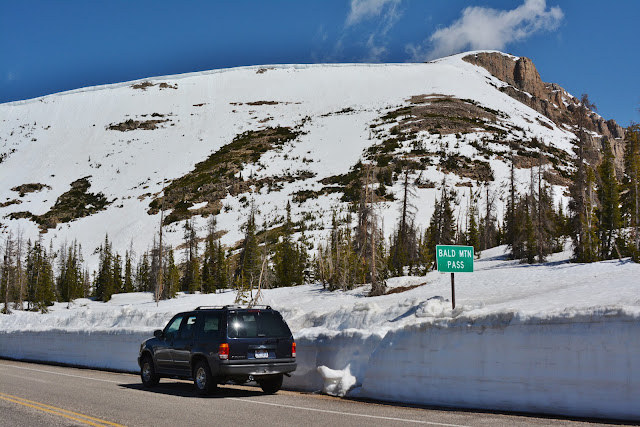 Here we are at the Pass with Bald Mountain looming over it, pictures actually taken on the return after having continued on to the entrance to the Highline Trail, 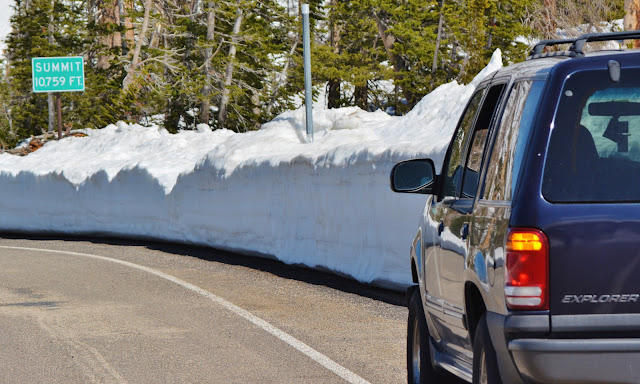 Below is a view of the Pass and Bald Mountain on June 4, 2016, with visibly less snow than this year. 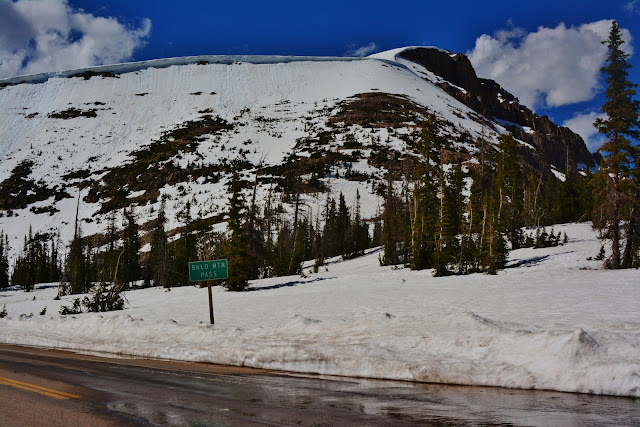 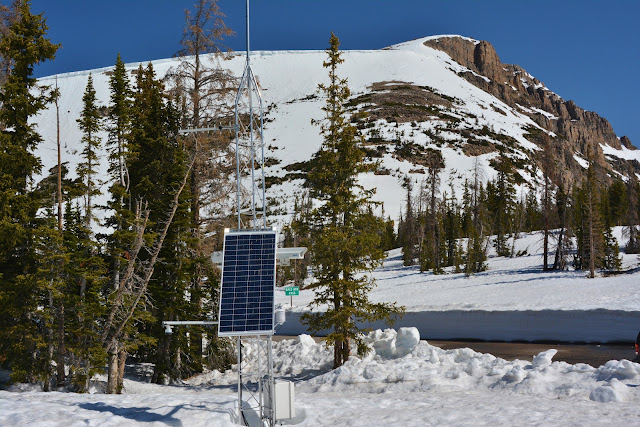 Here we are seeing the weather station operated by UDOT (Utah Department of Transportation)  from which I acquire daily information on the snow depth and temperature. 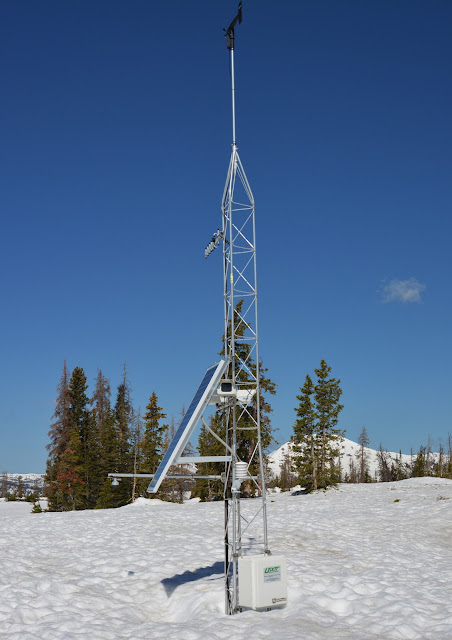 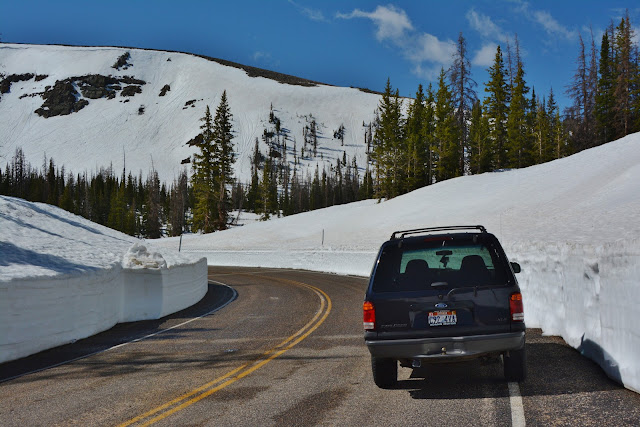 From the pass we continue to the northeast seeing the snow depths. 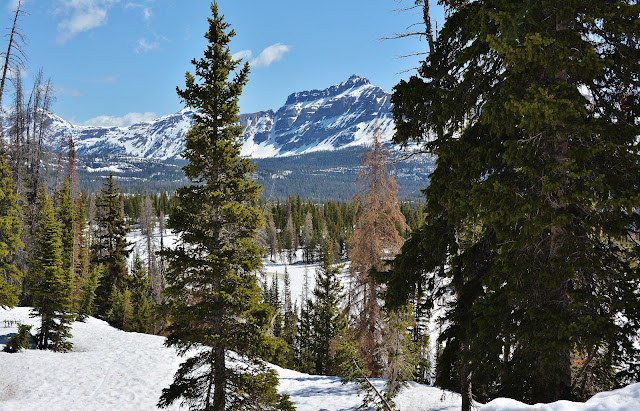 Shortly there is a turnoff…of course now snowed in, from which we see below Moosehorn Lake, still frozen over, and in the distance Hayden Peak. 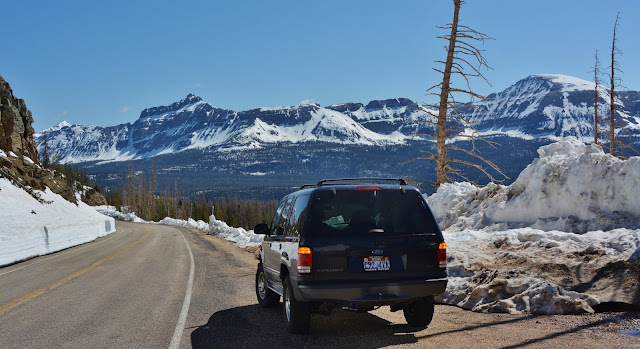 A little further along as we descend to towards the Mirror Lake turnoff,  the panorama is enlarged, also with Mt. Agassiz on the right 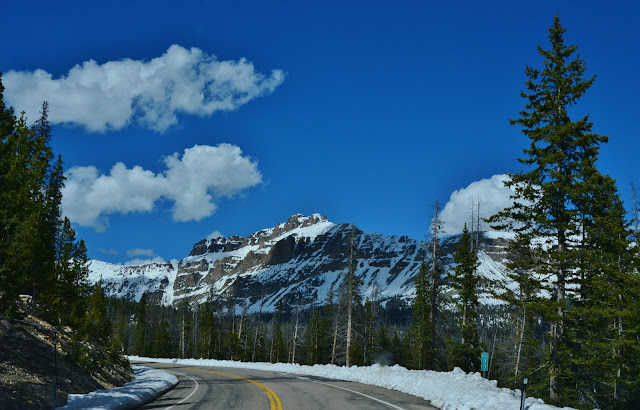 Above is a photograph of Hayden Peak on June 4, 2016, I show to indicate again there was much less snow last year.

From this point we swing our view to the south looking towards the Grandaddy Basin area, still with a great deal of snow. 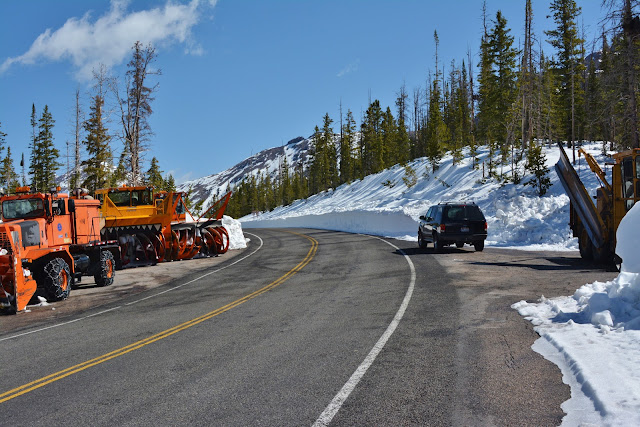 We are here approaching Hayden Pass, and find all the snow removal equipment parked at the pull-offs for Butterfly Lake, which was still frozen. 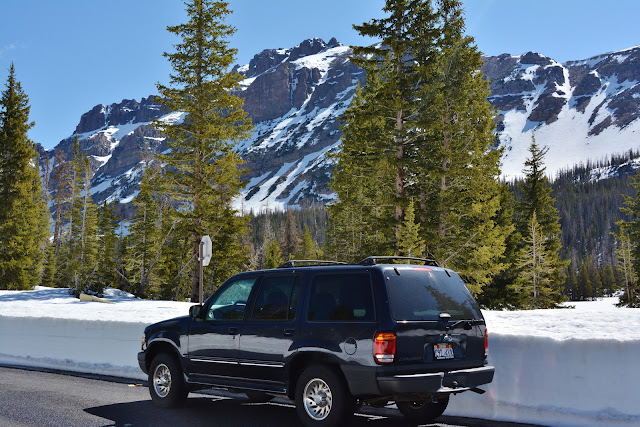 Now we are at the 2nd important objective of my drive, to see the
entrance to the famous HIGHLINE TRAIL
zoom in on the sign you see below. 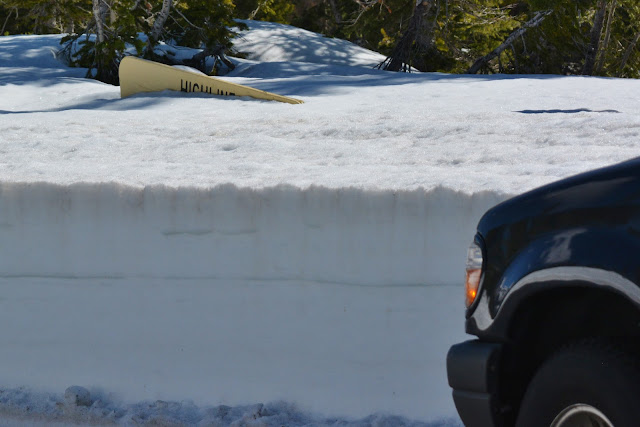 Below we see the sign on June 4, 2016…..so it will be likely at least until the end of June that there will be access…..of course depending on the thaw. 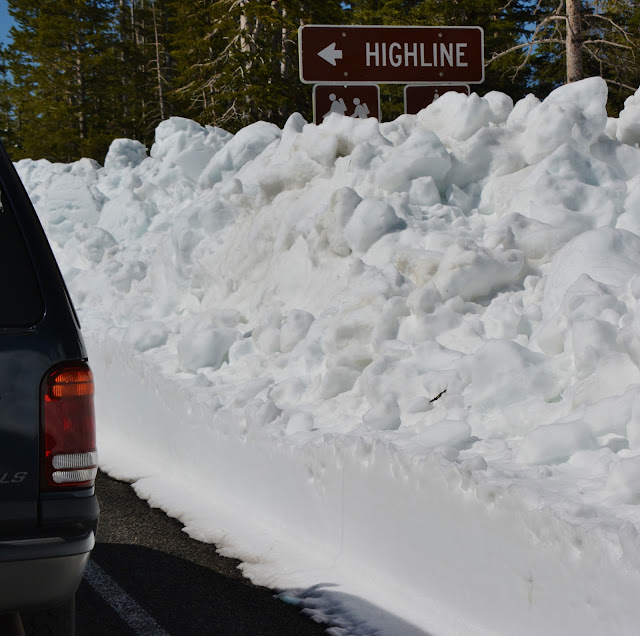 We have turned around and heading back, seeing the sign to the Highline Trail, on the west side of the highway. 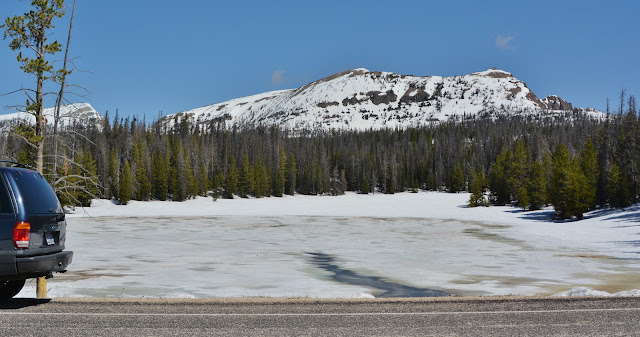 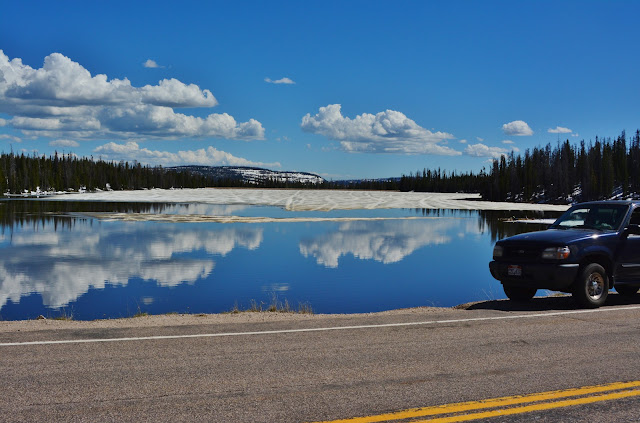 We have now quickly traveled back-in-time photographically to the
GATEWAY TO THE GRANDADDIES
on June 23, 2016 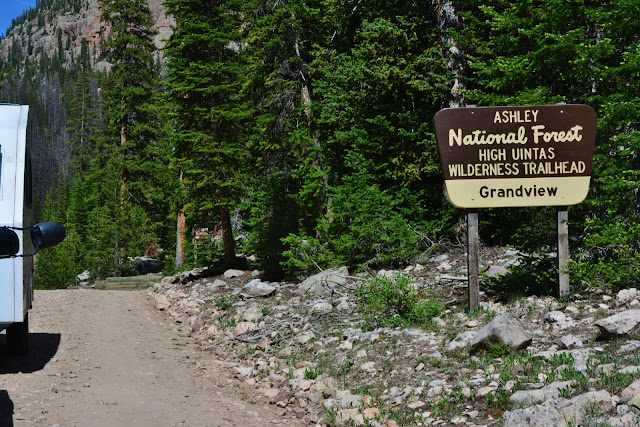 This was my first 2016 Season backpack, and my schedule has me doing my first 2017 backpack from this trailhead too. 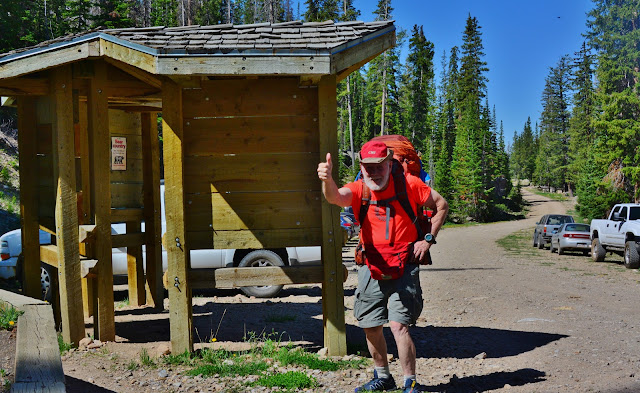 What is the access to the Grandview Trailhead…NOW?
I just talked to Sheila at the Forest Service Ranger Station in Duchesne.  She reports one of the rangers snow-shoed in there a couple of weeks ago, and was amazed how much snow  there is. 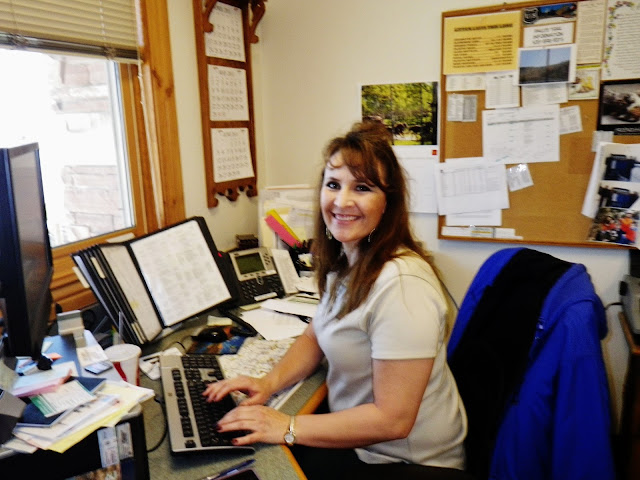 THE PLAN:  They hope to have the road open in about two weeks, but for a couple of weeks it will be used for a timber sale.

For backpackers?
It will likely be in about 1 month–THAT WILL GIVE ME TIME TO KEEP WORKING ON GETTING IN SHAPE AFTER MY BACK SURGERY–NOW HIKING EVERY DAY WITH MY BACKPACK–THIS WEEK WITH 43 lbs.  NEXT WEEK=46;  THE FOLLOWING=48;  BY BACKPACKING TIME=50 lbs……although I don’t plan on backpacking with that much weight, except for the 136 miles on the Highline Trail in August.
I will keep in touch with Sheila, and keep all of you informed about access, along with any other access information I can glean from other areas.
UPDATE Tuesday June 13
Just talked to Jeff at the Duchesne Ranger Station who reports that they have heavy equipment clearing the road of snow with about 1-1/2 feet of snow at the Trailhead, but the road will only be accessible for a timber sale, and not  for backpackers for “2-3 weeks,” which would mean between June 27th to July 4th.  He asked me to call back for updates in a week….at which time I will give an UPDATE here.
In the meantime, get some exercise to be in shape, as I’m doing now in my 82nd year, with a daily mini-hike with backpack, today with 48 lbs. of load.
*****************************