Scheduled DREAMS for 2017 (82nd year) Combining with it the ENTIRE HIGHLINE TRAIL…if my  “ANTI-AGING CHALLENGE” formula keeps doing its MIRACLE! 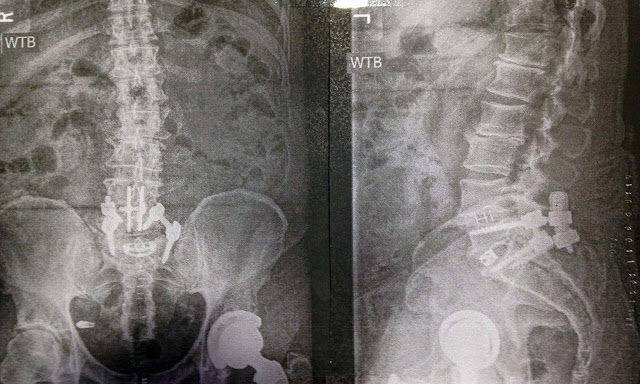 In the left frontal view, you can also see my titanium hip

Recovery today at 2 weeks is surprising the medical community, nonetheless, there will be no International Half Marathon in Guatemala until May 2018.   Today,  March 27th,  my walking routine has stretched to 3 miles, including an occasional careful jog crossing streets to avoid being run over–and joyfully no pain is experienced in the left leg, which previous pain started this new episode in my 81st year.  Distances will continue to increase. By May 13th, a light backpack will be included in the routine,  beginning with 20 lbs. and each day will be added to, May 24 the weight to 36 lbs, and will continue until backpacking begins.  Short jogs, without backpack, will also be done every other day, along with all kinds of exercises

So for 2017, I’ll concentrate on the High Uintas Project, and of course, keep the Guatemalan Foundation going to the end of August..to complete our GOLDEN ANNIVERSARY YEAR ...hoping some donors will give in 5 months what they normally do in 12!

THE BACKPACKING SEASON FOR 2017?

Utah’s record snowfall will undoubtedly affect backpacking, as was the case in 2011 when backpacking in the High Uintas wasn’t possible until mid-July.  This likely will force modifications in my scheduled backpacks, at least one of them being added to doing the entire HIGHLINE TRAIL in August, beginning at the eastern end near Flaming Gorge and finishing at the Trailhead on the Mirror Lake Scenic Byway!
Other than this  back glitch, my Anti-Aging Challenge formula is
working so well  the modified list of backpacks at the end of this post is the dream for 2017–at 81+ or in my 82nd year:
**********************
NOTE:  By the way, if you don’t know about the Dinovite potential and its amazing qualities for solving all our nutritional, longevity and mental problems, check them out at the end of my ANTI-AGING CHALLENGE article on my website.
**************************************
Following is the slightly modified post on:
THE FAMOUS HIGHLINE TRAIL
Many have seen the Trailhead sign along the Mirror Lake Scenic Byway, under Hayden Peak, as the highway is about to descend towards Wyoming.  It is located at 10,378 ft. and from here heads east. 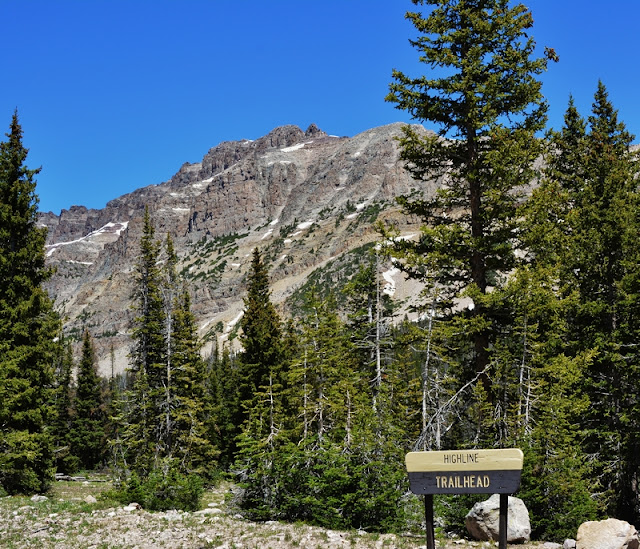 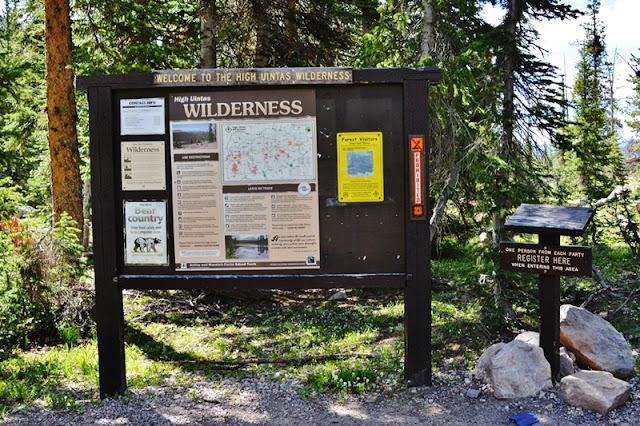 At the WESTERN HIGHLINE TRAILHEAD there is a nice area for horse packers with restrooms, and a parking lot for backpackers with Restrooms and water, where this nice sign and register are found. 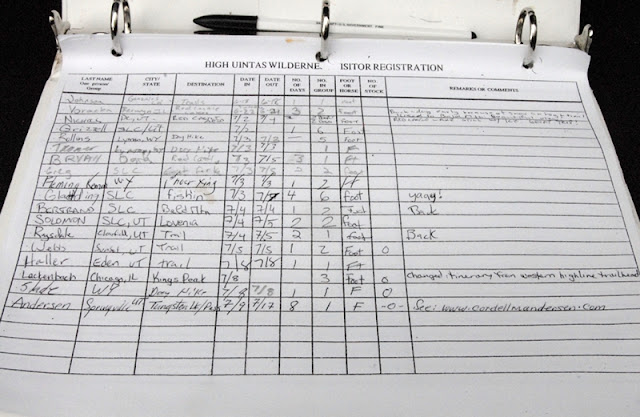 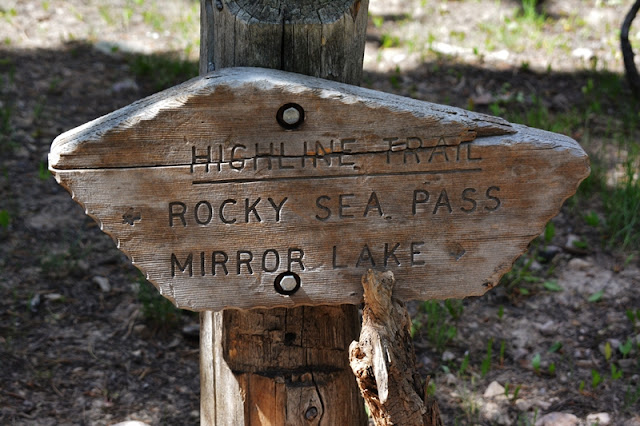 Down the trail, a bit, and here and there along the trail are found signs to guide hikers venturing into the Wilderness Area.
The HIGHLINE TRAIL is easily the most famous trail in the Uintas, most of it from its well-known Trailhead pictured here at Hayden Pass on the Mirror Lake Scenic Byway and from here it heads east following the spine of the High Uinta Mountains over 8 above timberline passes.   It is usually thought that it ends about 80 miles to the east on the slopes of Leidy Peak, where there is a trailhead above Hacking Lake.
But, that’s not where it ends or starts.  It rather has its beginning around 26 miles more to the east along U.S. Highway 191 that starts at Vernal and heads north to Flaming Gorge Dam and continues north into Wyoming. Below I’ll insert a labeled Google Earth view of the High Uinta Mountain Range showing the Western & Eastern HIGHLINE TRAILHEADS, plus most of the rivers and creeks that flow from the Uintas where 90% of Utah’s water is produced.
click on image to enlarge

The light colored areas are the above timberline areas & peaks
As we are seeing, the Uintas begin at Kamas, Utah on the west, and end about 150 miles to the east at the Green River.  It is the only major mountain range in the lower 48 states to be oriented east to west.
That EASTERN HIGHLINE TRAILHEAD
will be the focus of this photo/essay, but first, let’s understand a little better the subject of “TRAILHEADS” & “SIGNS”  in the  Uinta Mountains. 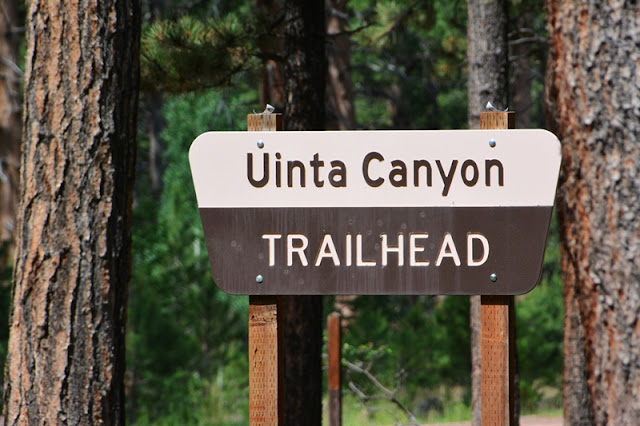 These kinds of signs are common all around the Wilderness area, here on the Uinta River. 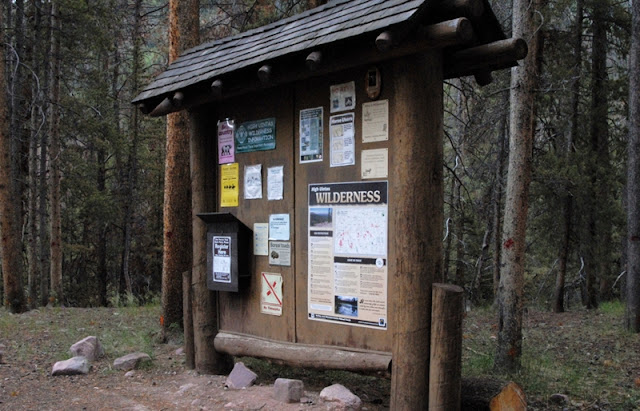 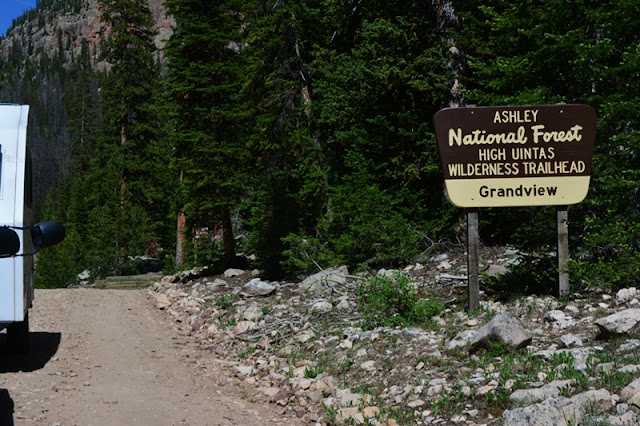 Even nicer ones are found in some areas like what many of us call
“THE GATEWAY TO THE GRANDADDIES,”
seeing here the entrance to the parking lot……… 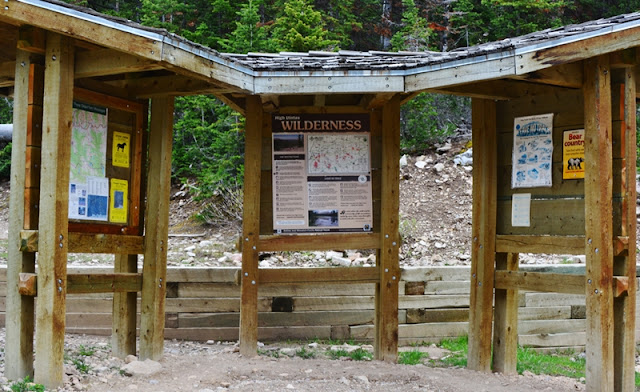 …….and nice signs giving adventurers all the information they need for a great outdoor experience. 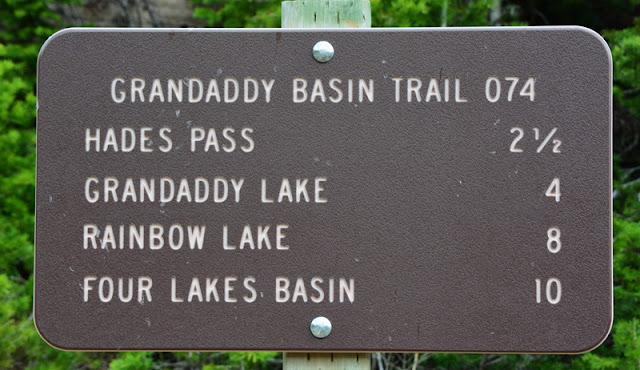 Just past the register,  as the trail begins, we find appreciated information on how far we have to hike to get to whatever our destination might be in the Basin. 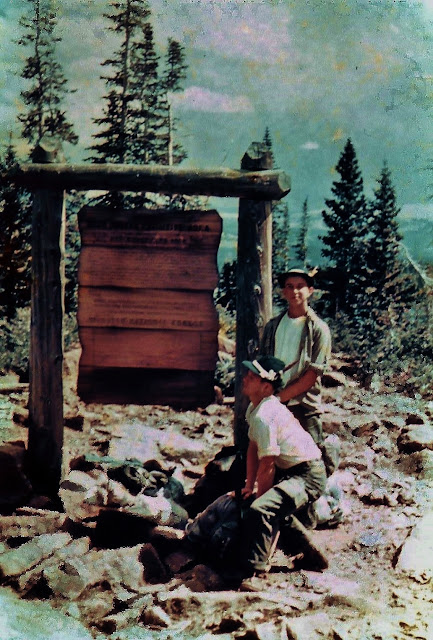 Even years ago up the trail from the Grandview Trailhead, at Hades Pass,  when it was just the
HIGH UINTAS PRIMITIVE AREA,
this great sign seen above told us about the wonders we were about to see (1954).
But, it disappeared many years ago and is sorely missed! 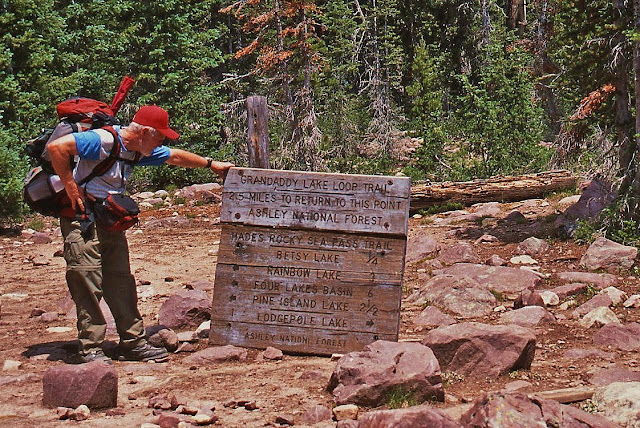 In 2003, when I began my HIGH UINTAS WILDERNESS PROJECT, this great sign was still in the Grandaddies, between Grandaddy & Betsy Lakes, but on the ground and I had to prop it up for this picture….but it is of course now gone.

THE FAR EASTERN END….or BEGINNING
From Vernal, Utah the highway climbs into the eastern end of the High Uinta Mountains, and at 28 miles from Vernal, one reaches the pass, seen below, approximately 2,300 feet lower than Bald Mountain Pass on the Mirror Lake Scenic Byway, near the Western Highline Trailhead. 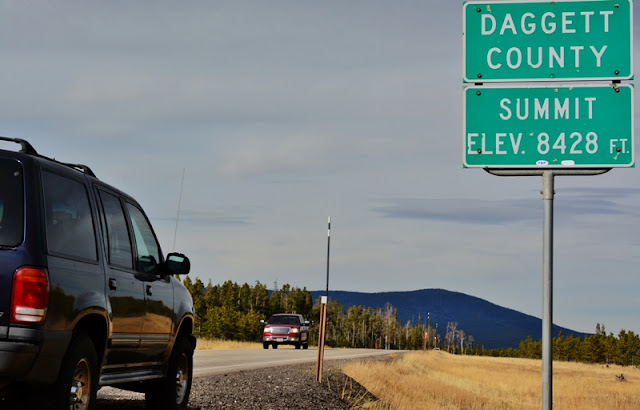 At this point, we have traveled 186 miles from American Fork, Utah and the Wasatch Front.  Most of the traffic zeros in on The Flaming Gorge Recreation Area, just a few miles further north.
But, what we are looking for is the Eastern end of  or the beginning of,
THE HIGHLINE TRAIL.
At a low point 3 miles down from the Pass, and just beyond the Interpretive  Display, we find a simple generic sign indicating that off to the west on a dirt road there is a trail, but, WHAT TRAIL? 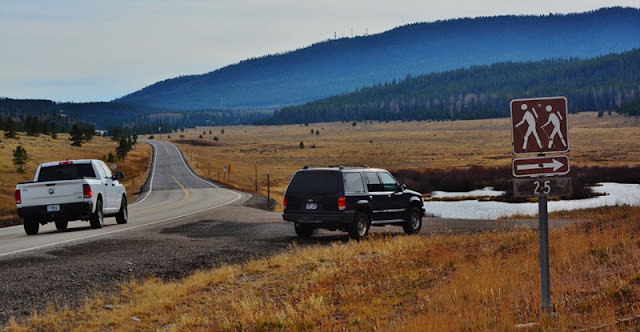 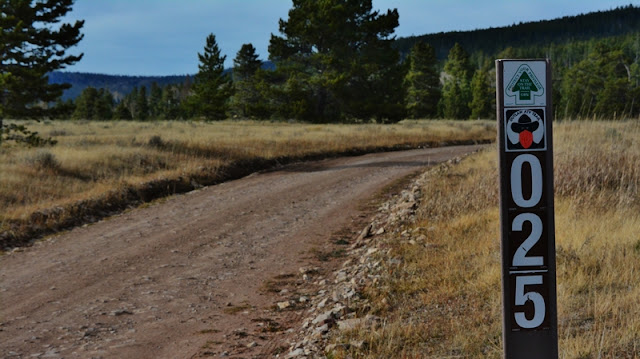 Shortly we come to a small sign with little detail. We have found….. 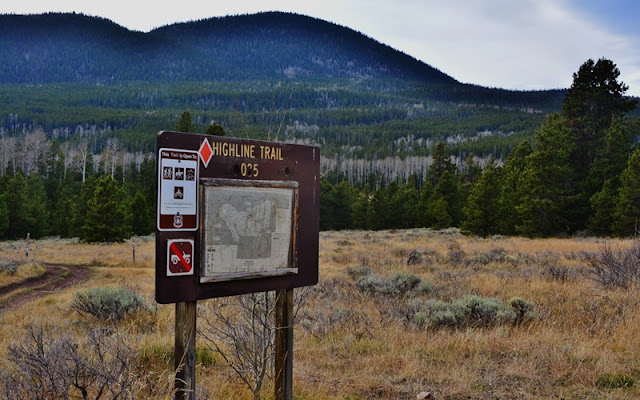 .
….THE EASTERN END OF THE
GREAT HIGHLINE TRAIL 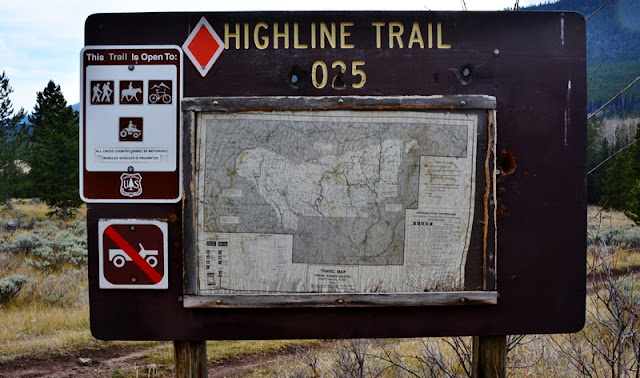 No really pertinent information.
No register.  No mileage signs.  No hint of where it goes.   Only a faded, worn out map!
It seems like a humiliating beginning for what is a GREAT TRAIL.
SOMETHING HAS TO BE DONE!
COME ON FOREST SERVICE–LET’S GET SOME NICE SIGNS FOR THIS GREAT 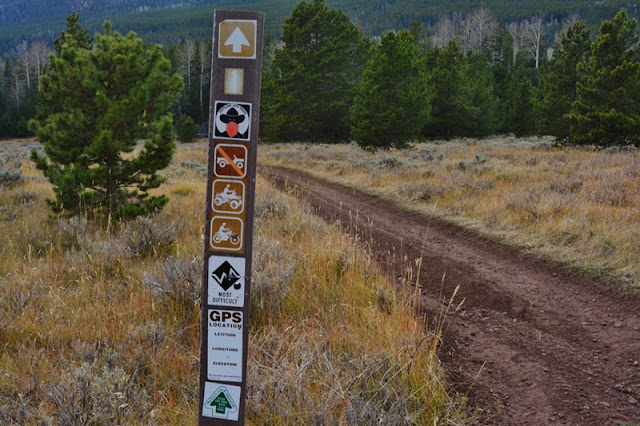 I hiked down the trail, well worn by the blessed ATV’s, to see if there was a sign, any kind of sign, but there were just the expected Forest Service markers you see here 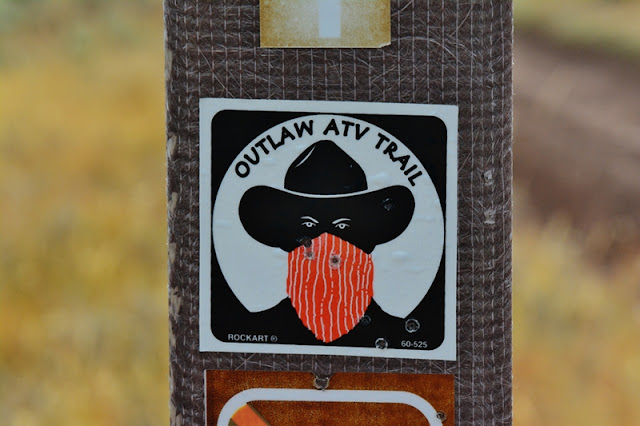 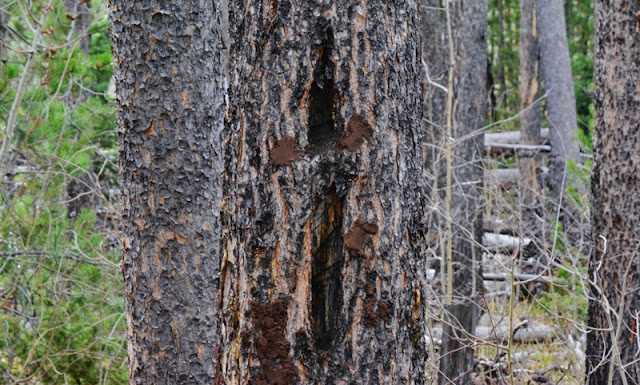 And a very old blaze on a couple of trees, plus some newer ones. 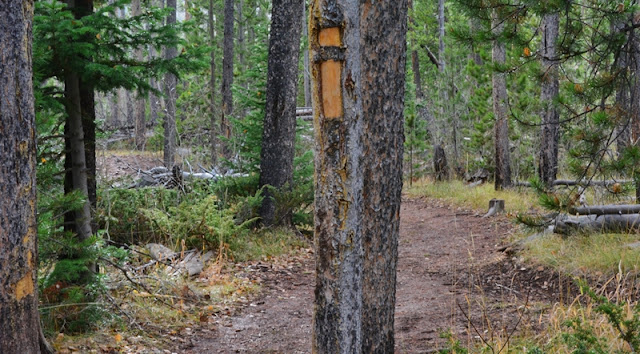 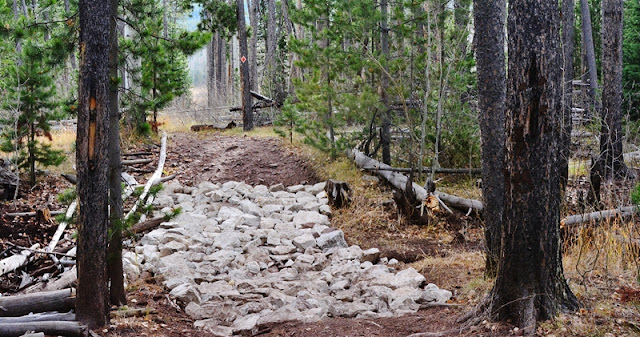 There were signs of road/trail work, and a bridge over what I believe is Carter Creek. 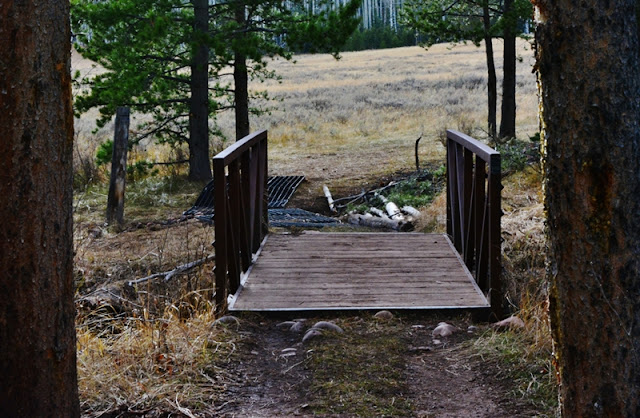 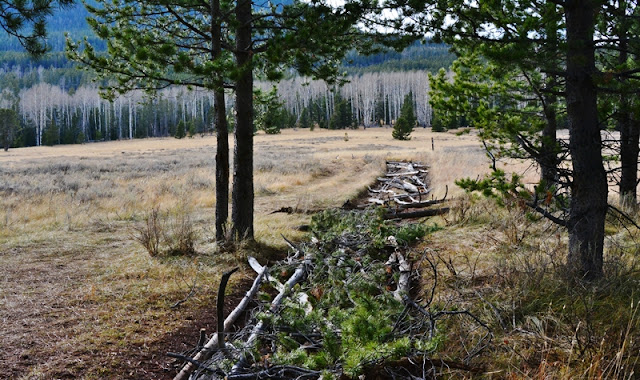 Along with efforts to keep the ATVs from ruining everything. 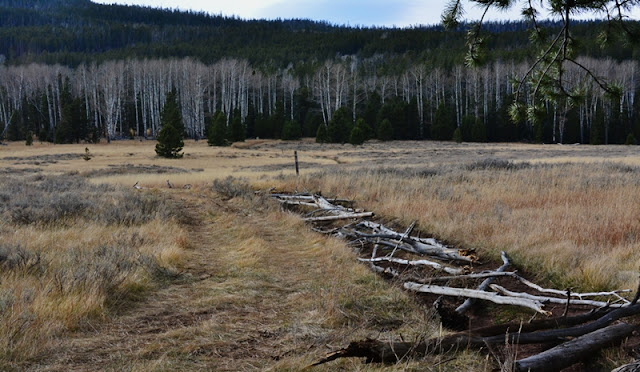 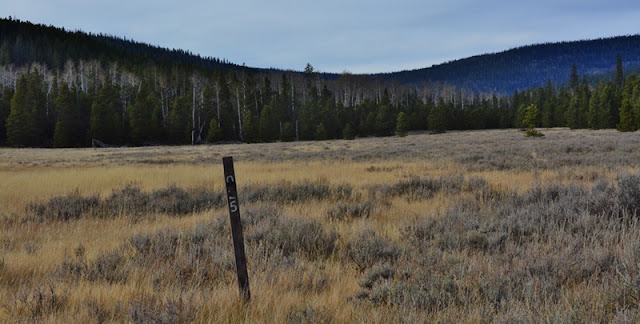 NO MILEAGE SIGNS WERE FOUND!
My topographical maps indicate that the trail heads up this draw, eventually going through the thick forest and over that low saddle to the west.

NOTE:  After first being advised that the eastern end of the trail was nearly impassable with deadfall, good news came from new High Uinta Friend, John Parker who emailed me, saying:
Cordell, I hope to see you on the Uinta Highline between Aug 15 and Sept 15. Those are the target for my hike of the Highline this year.
Good news for you! The trail between Hwy 191 and Leidy Peak was adopted a couple years back by the Uintah Basin Back Country Horsemen. They have cleared and maintained that first 20+ miles as a service project. My understanding is that it’s not impassable but now nicely maintained. Still, need good navigation skills but not a mess.

FOREST SERVICE CONTACT
Later I was contacted by Rhett Burkman, from the Forest Service Vernal office, and advised that the trail had been cleared by the Backcountry Horsemen, that “trail signs have a habit of disappearing on this section of trail” and he would make sure they check the trail as soon as they have access.

ALL GREAT NEWS FOR THIS 80+ YEARS OLDER, AS “DEADFALL” IS REALLY HARD FOR ME!

Let’s insert again our Google Earth view to help visualize the wonderful Uinta Mountains we are talking about.
The light colored areas are the above timberline areas & peaks

click to enlarge image
From the Eastern Trailhead, seen above on the right, the trail gradually–over 26 miles, climbs from 8,000 ft. to  Leidy Peak where it is above the 11,000 ft. timberline. From there it follows the spine of the Uinta Range for 80 miles traversing rugged alpine terrain as seen below, climbing 8 passes all over 11,00o ft., 3 of which are over 12,000.   12,600 ft. Anderson Pass being the highest near Kings Peak, Utah’s highest at 13,528 ft.

PUTTING INTO PERSPECTIVE THE PASSES...
…more than half of the 8 passes are higher than the summit of Mt. Timpanogos that is dwarfed by the High Uinta peaks!
The elevation profile high points are said passes, the profile showing the ups and downs of the 106-mile distance between trailheads, the western one near Mirror Lake at 10,378 ft.

The trail only dips a few times below timberline. 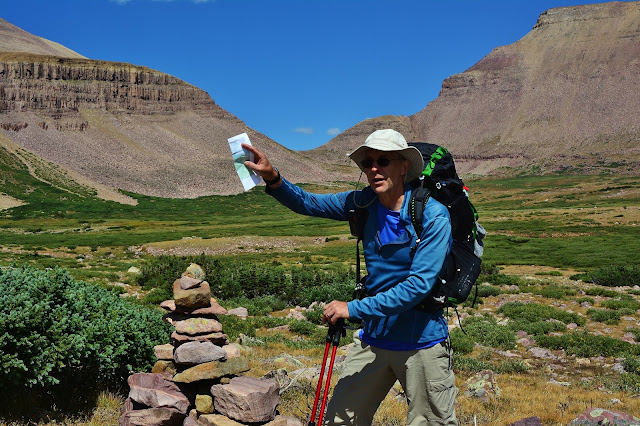 In 2016 as I was on my way to finally get to Little Andy Lake, Utah’s highest at 12,302 ft.,  I met  John Sowell, from Colorado,  and had a great conversation as he was doing the entire HIGHLINE TRAIL coming from the east. 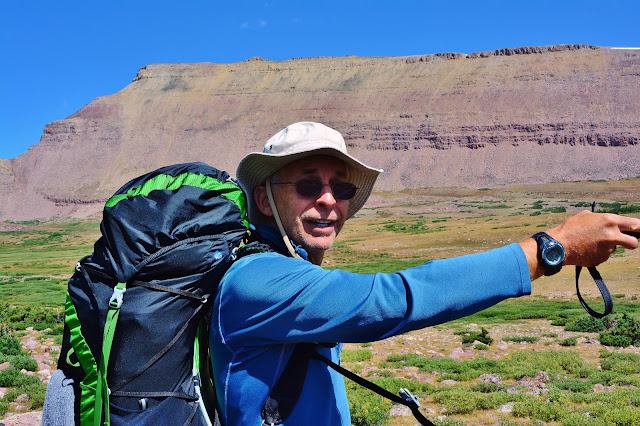 I told him about my plan years ago to do it too, even having printed a series of 14 topographical maps for the adventure, but then a glitch ambushed me and it looked like I would have to get used to being a cripple.   Then I told him of the miracle that had me without pain for the first time in 30 years, with at that moment being on the verge of what I was thinking would be my last adventure–getting to my lake.

But since meeting him, and being so pumped up for having finally got to Little Andy Lake, I’m now training for the best summer of backpacking of my life–in my 82nd year, the crowning trip being in August  backpacking the entire
HIGHLINE TRAIL FROM EAST TO WEST!
Thanks, John, for inspiring me!

THE CROWNING BACKPACK OF THE
HIGH UINTAS WILDERNESS PROJECT

On this approximately 14 day backpack, I will take some detours to explore other areas critical to my project, such as:

Another visit to Little Andy Lake–taking the time to get better pictures,  and continuing the detour to Trail Rider Pass, Beard Lake, & George Beard Basin,
Next, the unexplored lakes in the Upper Garfield Basin, others in the Oweep Drainage, plus very importantly, Crater Lake you see below and others.

I will attempt one more time to realize a goal of getting the perfect photograph of this incredibly beautiful scene–CRATER LAKE, the deepest in the Uintas at 147 ft. The plan is to get up on the saddle to the north so I can look down on the lake and with a fish-eye lens photograph it with Explorer Peak in the background.