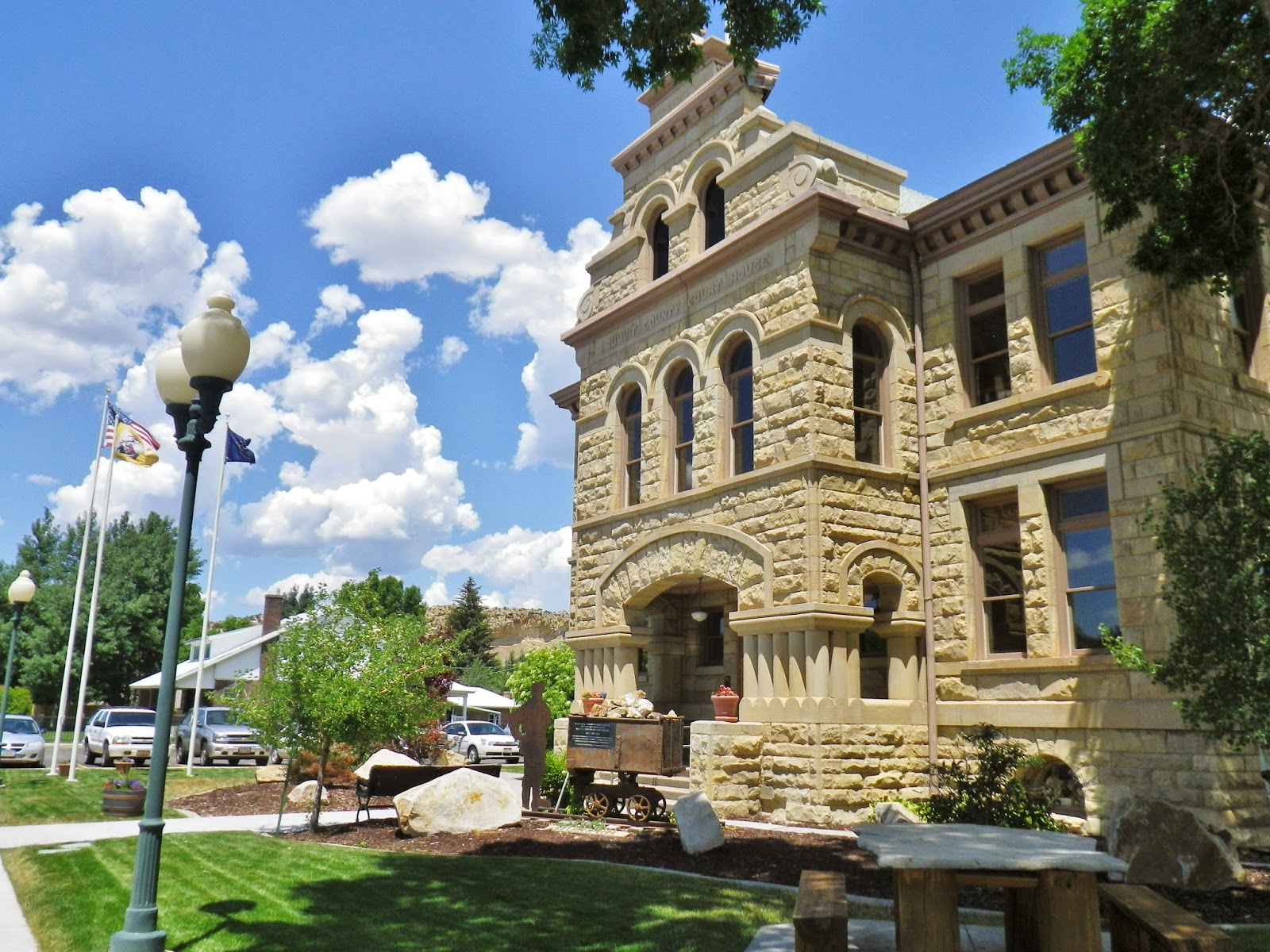 Speech:
“My love affair with the High Uintas–Its Mysterious Past  & Present”
DONE…ONE GREAT EXPERIENCE  IN COALVILLE!


KSL Outdoors Radio –-Click on  PODCAST of the interview, Saturday, April 12th
Forgive me for having the link to the wrong podcast for a few days.  GOT IT NOW!  At about  6:10 AM…..Note:  Excuse me for the poor quality of sound from my cell phone, and hoarse, raspy voice–likely because I spoke too loud–sorry!  But I think it is understandable.

click here to see  PHOTO/ESSAY:
SAVED THE WORLD….COULDN’T SAVE MYSELF!

Part I: 64 pages (eventually a book)
My  22 year “VISION QUEST”
Inserted below is the title page..click on it to enlarge.
If the above link doesn’t work for you, click below to go to the Page:
Autobiography: 0-22-yrs. 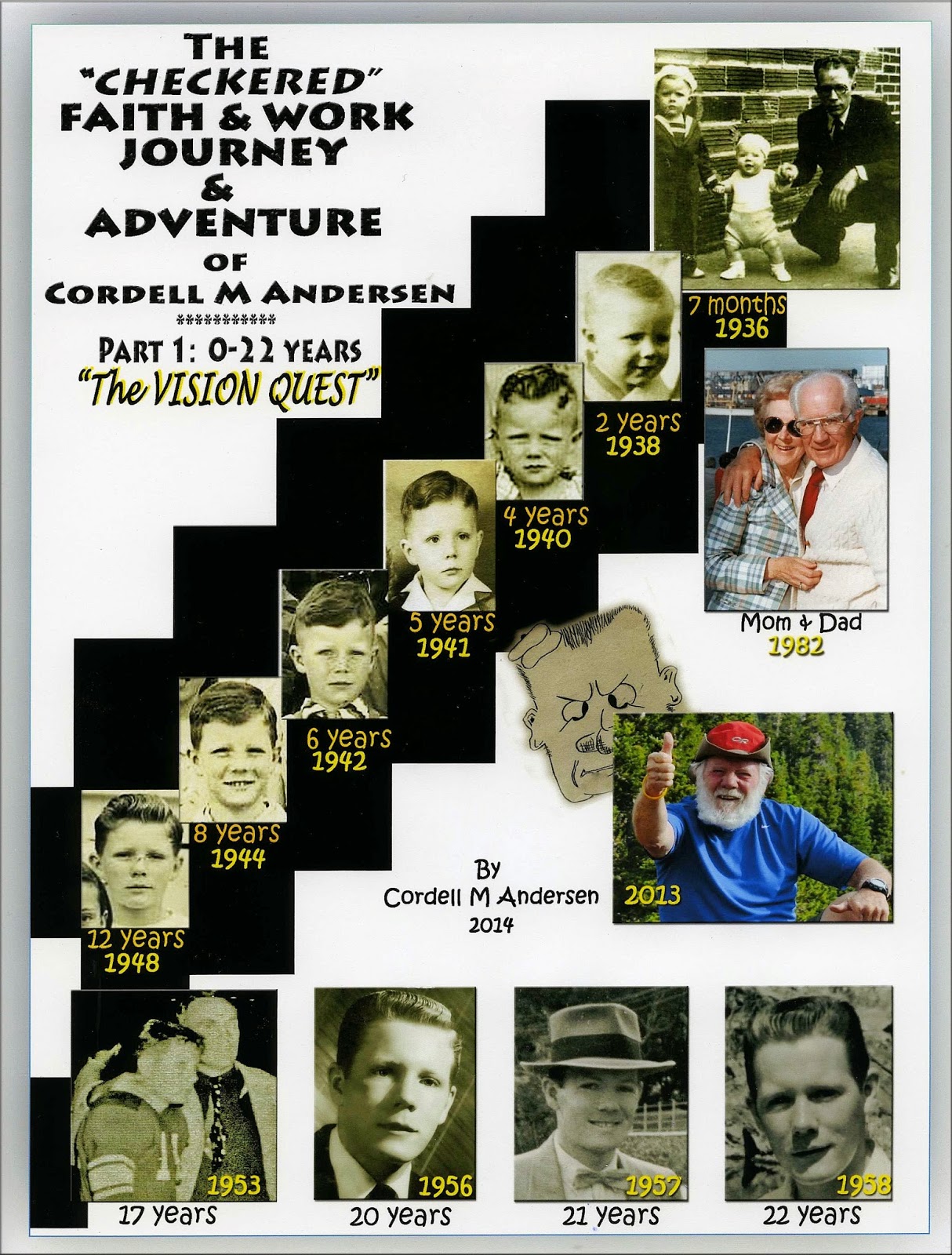 Scroll down to see highlighted in light yellow:
PHASE II OF PREPARATION FOR BACKPACKING

Each of the 14 plus the “LAST GASP TRIP”  with
BEAUTIFUL PHOTOGRAPHS,
IMPORTANT COMMENTS, and
TOPO MAPS and ELEVATION PROFILES 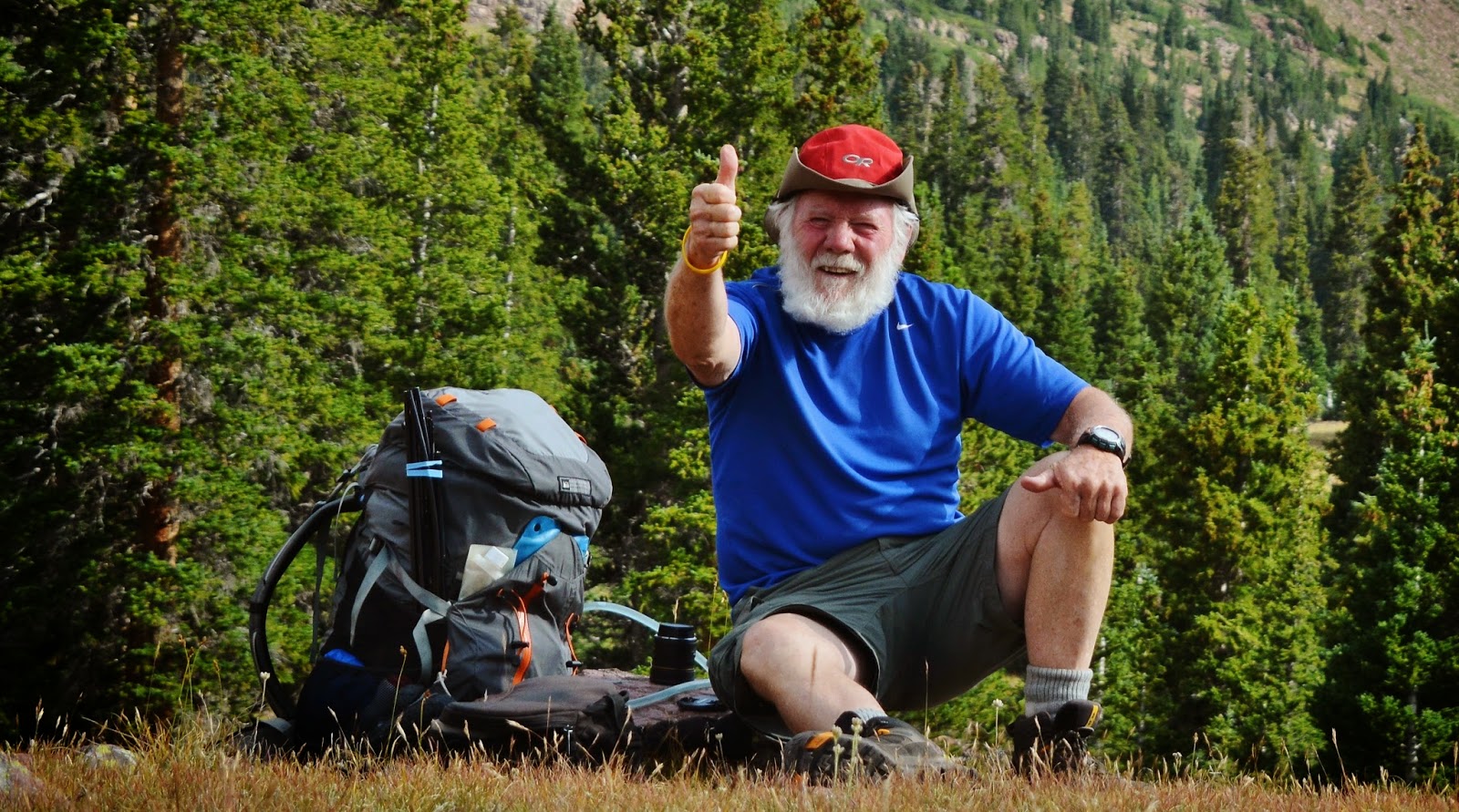 NOTE:  Check this post often until backpacking season as I will continually update and enhance, and,  as the backpack season approaches, dates will be inserted making possible you throwing together a quick trip to meet me on the trail as  happened at Crow Basin last year pictured below.  I’d love to have a bunch of these kinds of chance meetings. 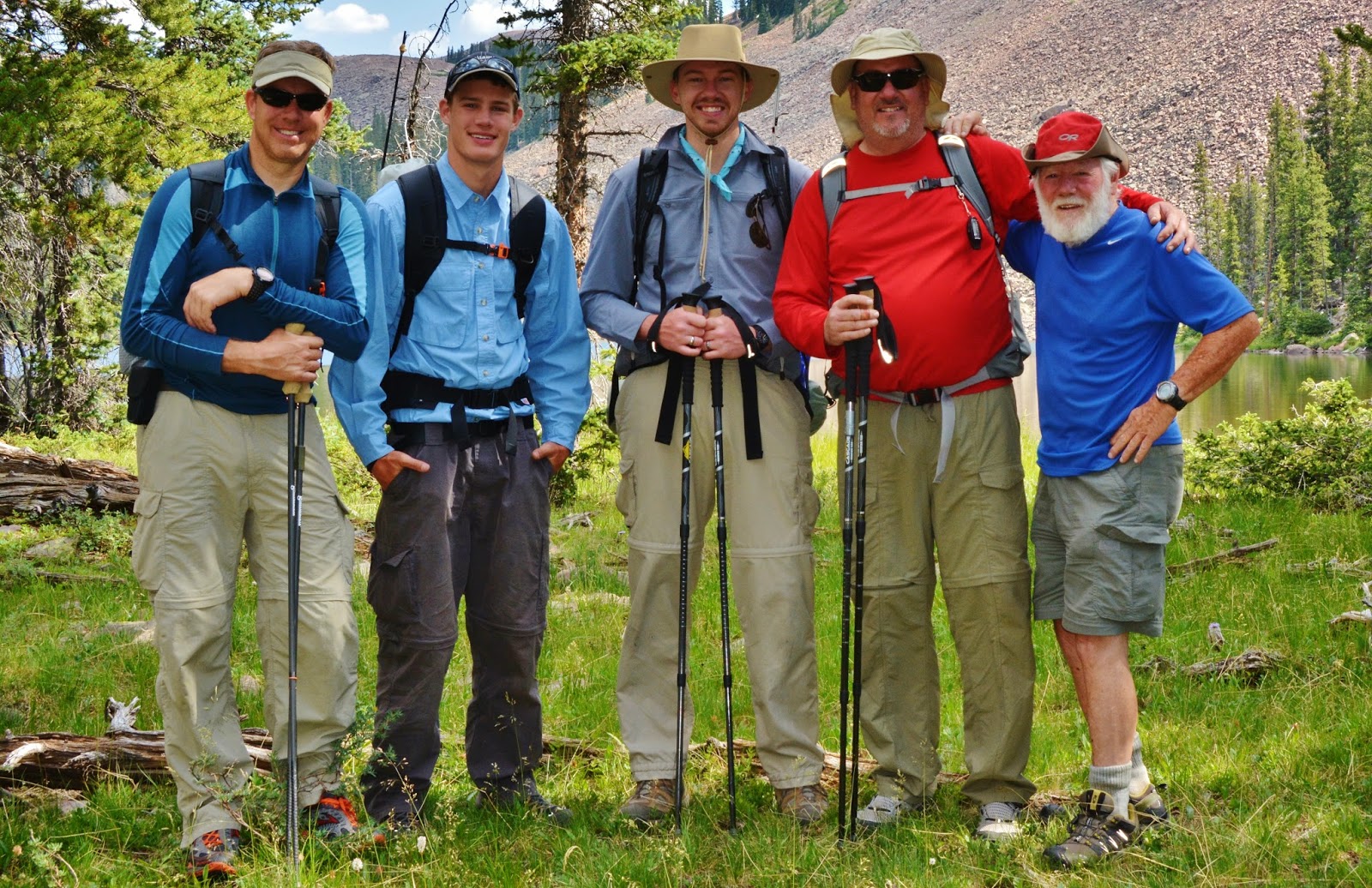 Darren & Ryan McMichael, and Tyler & Tom  Summerhays…and the old guy…easy to see why in my football pursuits as a youth I was called “Little Andy”

INTRODUCTION:  Those who know me will recall that in 2012 my career as a backpacker had seemingly come to a screeching halt at the end of 1,500 backpacking miles of struggle to “NEVER GIVE IN…EASILY!”
In preparation for that “failed season” I did do 3 PREPARATION YouTube videos that in principle are valid…seen so far by 1,613 people….and are being re-issued as noted below.
Back surgery that Spring  (2012)  helped a little, but not enough, resulting in no backpacking in 2012.  I didn’t quit,  but did many painful miles trying to figure how to continue and tried to share what I was learning by producing  a  whole series of “COMEBACK”  and  “FAKING NOT BEING A CRIPPLE”  YouTube videos–-seen by 1,467  people, which are all worth watching–especially if you’re struggling. If interested click on the YouTube Videos page and check them out.
By the early Spring of 2013 I was depressingly almost resigned to being a cripple, but gave the physicians one more shot. Hip replacement surgery at that time did the trick and 6 weeks later I was backpacking without pain for the first time in 30 years! I was blessed miraculously–literally with a NEW LIFE that led to an an incredible 2013 season documented through 8  YouTube videos.
NO EXCUSES…..
Now,  with no excuses anymore, as hopefully everything has been replaced by titanium, transplants, held together with screws, reconstructed, or removed–except my brain,  I have come up with an incredible list of 14 backpacks I still want to do. They follow below inserted by trip numbers into a  Google Earth view of the Uintas,  followed by the numbered trips with important details, photographs, topo maps and elevation profiles, along with a re-issuing of my 2012 PREPARE YouTube videos, with links to two of them at the end of this post. The 3rd one: Gear & Backpacking Food will be re-done with important changes in key backpacking equipment for 2014.
I’m doing my best to  lead the way with CRUCIAL PREPARATION by my example.   I have hiked every day this year, during Jan. with a 45 lb. pack on my back, Feb. with a 50 lbs.,  March with  56 lbs. and now in April with 60 lbs…..at least around a big block or more daily, regardless of the weather!  I’ll admit it’s not very much every day, but because of my age if I miss a day I immediately start feeling my body stiffening up and I get real cranky–so seems like there’s no rest for me……. ever!

That has the good folks of American Fork, Utah stopping and offering me handouts assuming I’m  homeless with everything I own on my back, or they say “Are you alright?  (I’ll admit I must look pretty bad!)  Could we give you a ride?” 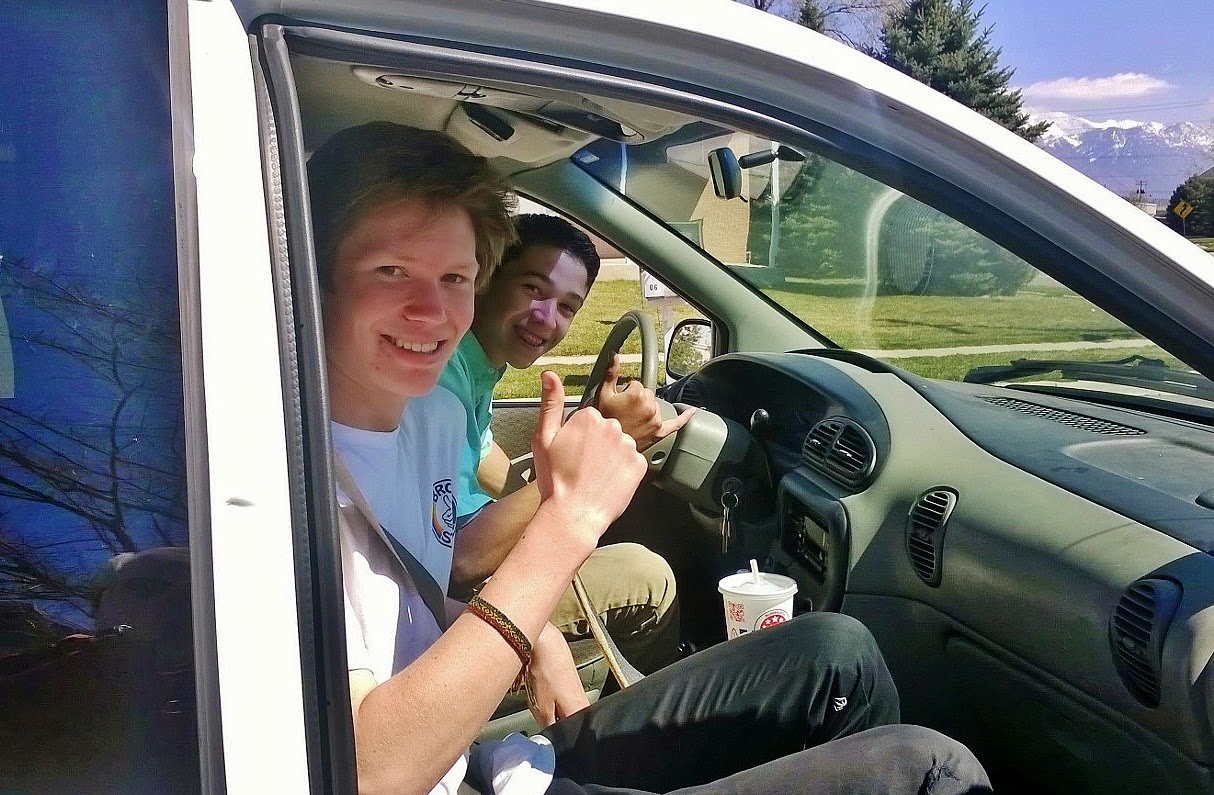 I finally got a shot of this happening (04/07/14).  A white van slowed and almost stopped as it passed me.  Then from down the street it came backing up and stopped opening the door, with these good kids offering me a ride.

I tell them, exaggerating and fibbing  a lot, saying,  “I’m an eccentric millionaire….not a weird old guy!”     I then give them a business card and mention my HIGH UINTAS WILDERNESS PROJECT  explaining,   “I’m doing my darnedest to make good on my dreams in my 79th, & 80th year,  to get it all done–and if I’m still alive by then I’ll come up with a NEW  DREAM LIST,”…..…a prime one already added at the very end of this post entitled “The Last Gasp Backpack!” 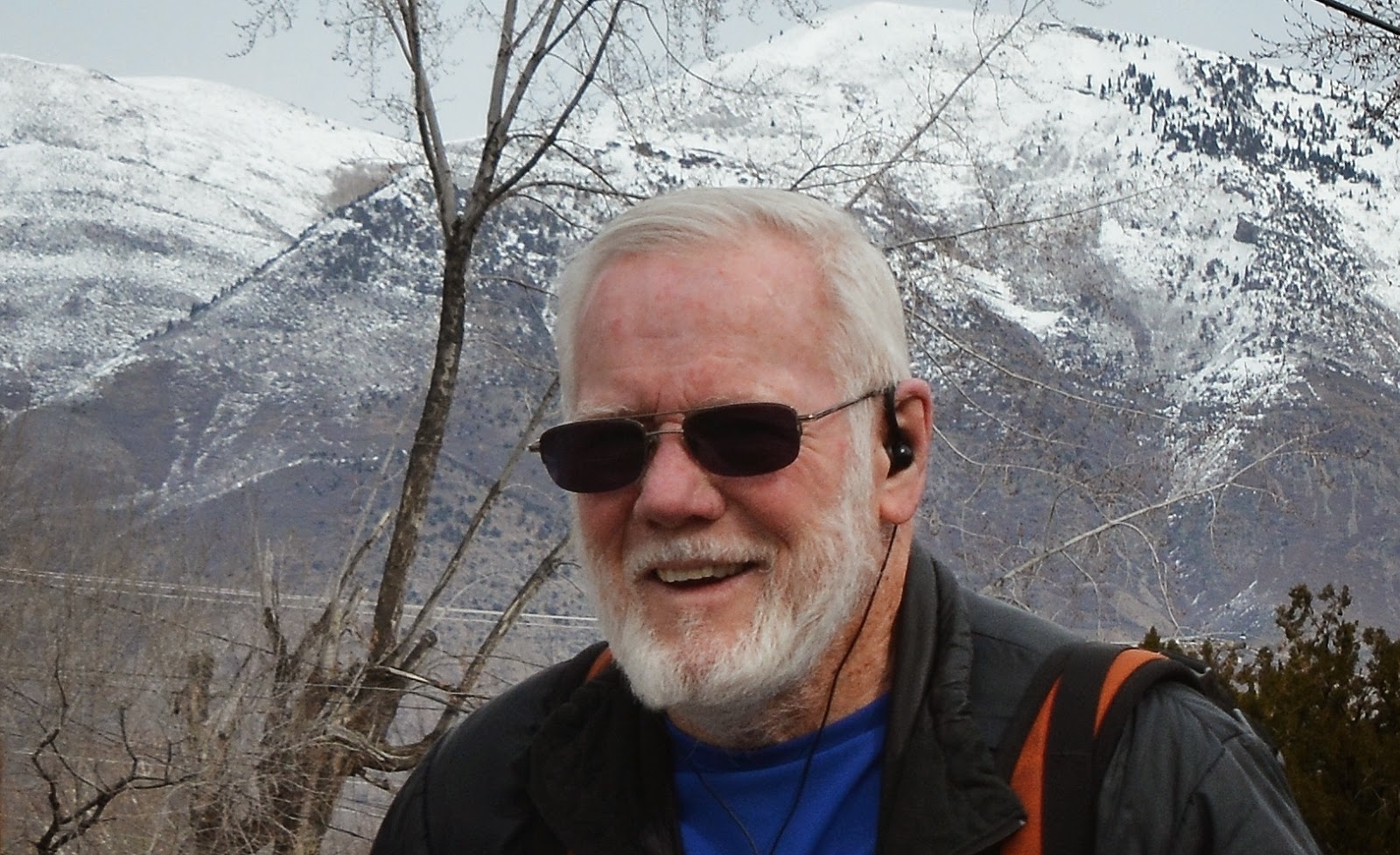 Now I’ve added some jogging to my training regimen and  also  taken a page out of my autobiography that describes  me walking the rails between 8-14 years old.   I eventually could walk the entire mile to our home, and could jump from side to side,  all without falling.  That honed  my balance skills and prepared me as a successful football running back and for mountain climbing.  I need that desperately now as something has changed a tad in recent years! 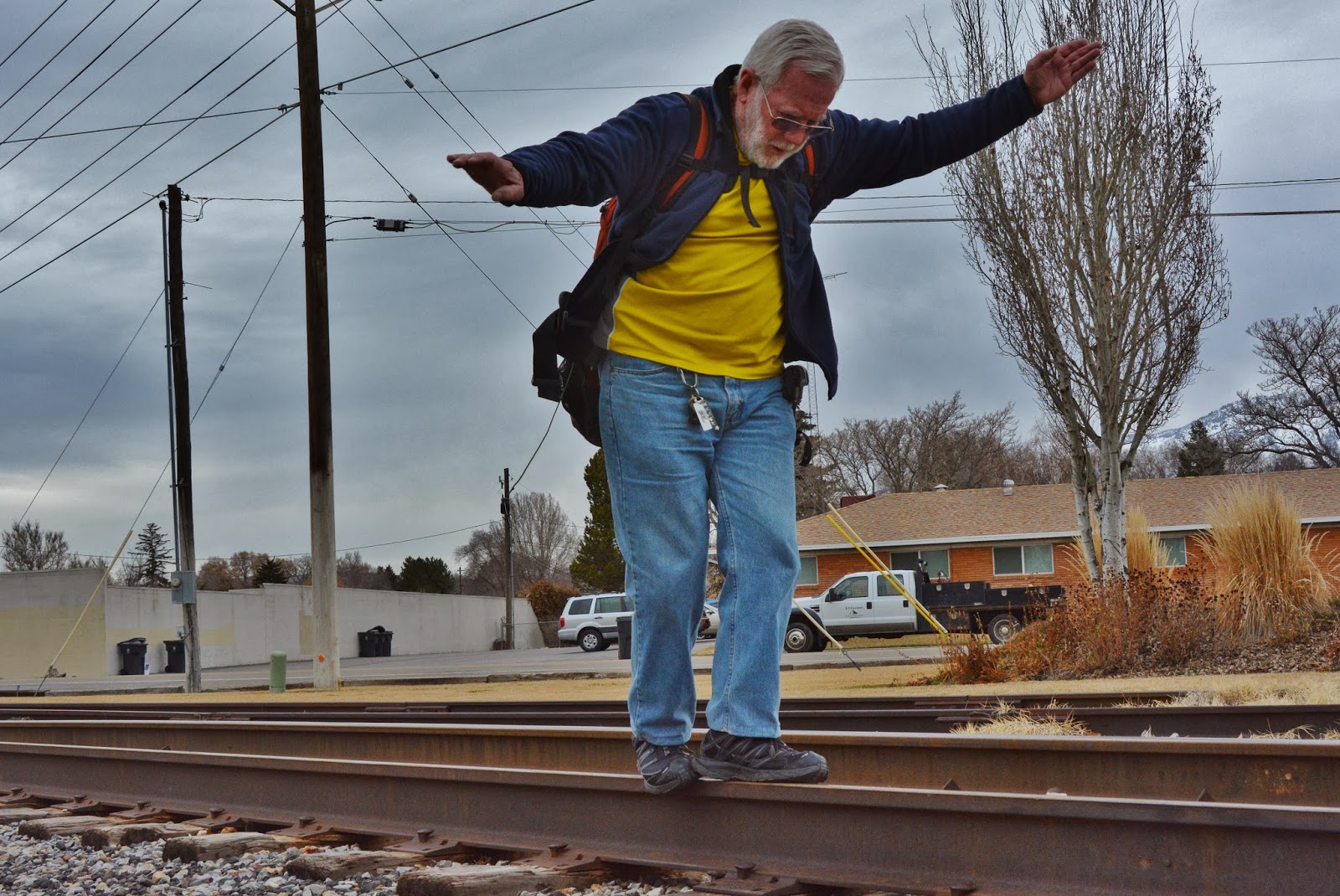 So, along with my urban backpacking, jogging, and in May, as explain below,  mountain climbing,  I go to the railroad two blocks from where my Cabin trailer is  parked in American Fork,  and work on getting my balance on track (pun intended).  As an old guy the first few times I could only take a step or two before falling, but by the end of the 50 yards I could do up to 15 steps, and the next time 20 without losing my balance, now up to 40, etc.  I’ll do this every other day and hope to get my balance back so I won’t fall  into a ravine and have happen to me  what probably was the end of  Australian  backpacker, Eric Robinson,  in 2011 who has never been found in his backpack across the High Uintas Wilderness.  I’ll keep working on KEEPING ALIVE and take all the precautions Eric ignored!

Sounds like a lot?  …..Yes, it  takes a lot for an old guy to keep alive and moving,
but I’m just not ready yet to accept the other option.

Frankly, I’m now just doing the minimum for maintenance, but do add 5 lbs. every month to my load, and in my training don’t normally use the hip belt to force my shoulders and back to get stronger. Then when the season is upon us, usually with lighter loads,  I’ll quickly be able to build on the foundation of strength & balance, and develop endurance and stamina.  I’ll be able to love being on the trail and focus on the beauty that surrounds me.
SPRING:  Phase 2 of Preparation
I will persist in hiking a around town, now in April with 60 lbs. on my back. By May, when the mountains begin turning green, I will add to my workout regimen one two day backpack each week climbing a mountain in the Utah Valley area.  I will focus first on climbing those I haven’t climbed, first up:  SQUAW PEAK

Cascade Mt. in the left background, Squaw Peak is seen dead center, with Rock Canyon to the right and then almost visible Provo Peak covered with snow, then Y Mountain, all to the east of Provo.

I have already climbed Cascade Mt., Provo Peak, Y-Mountain, and, above Maple Flats, what I call Maple Mt. Remaining in this area to be climbed is Squaw Peak, and the two Buckley Mountains. between Provo and Springville.  These comprise the Seven Peaks that years ago was to be a recreational area , but now reduced to a water park by that name in Provo.
I will make each an overnight backpack to break-in new equipment, and to test my physical abilities, and get stronger. Those two will be followed by an overnight backpack to Maple Flats exploring the pathway of the pioneer timber-slide down to Provo’s foothills, as mentioned in one of my Comeback YouTube videos.  I will report on these efforts that will start  as Spring begins to turn the Wasatch Mountains green  For these overnight hikes I will begin using my SPOT Personal Tracker and post links here.
Note:  Actually I’ve already started once a week doing  a fairly long hike up canyons near American Fork, that lead towards Mt. Timpaganogos, recording with camera the birth of spring in the Wasatch.
Then on June 1st,  when Skycall Satellite and Russ Smith will deliver to me the satellite phone for the backpacking season, I will move to the fringes of the High Uintas to do research and exploration, especially in the far eastern end of the Uinta Mountains at Dinosaur National Monument, and the famous Butch Cassidy outlaw hideout at Browns Park,  until the thaw permits beginning my schedule as outlined below.
My first High Uintas backpack (date depending on the thaw) will  undoubtedly be carefykkt slow, the next following with only one or two days of rest in my little Cabin trailer  preparing, including driving down where I can get an internet connection to program my SPOT tracker for the next trip, and once a month make it back to American Fork to do  what’s necessary to keep the Guatemalan Foundation going.  With only one or two days between backpacks I’ll  avoid losing my physical conditioning and acclimatization to high altitudes and save a lot of travel expense. 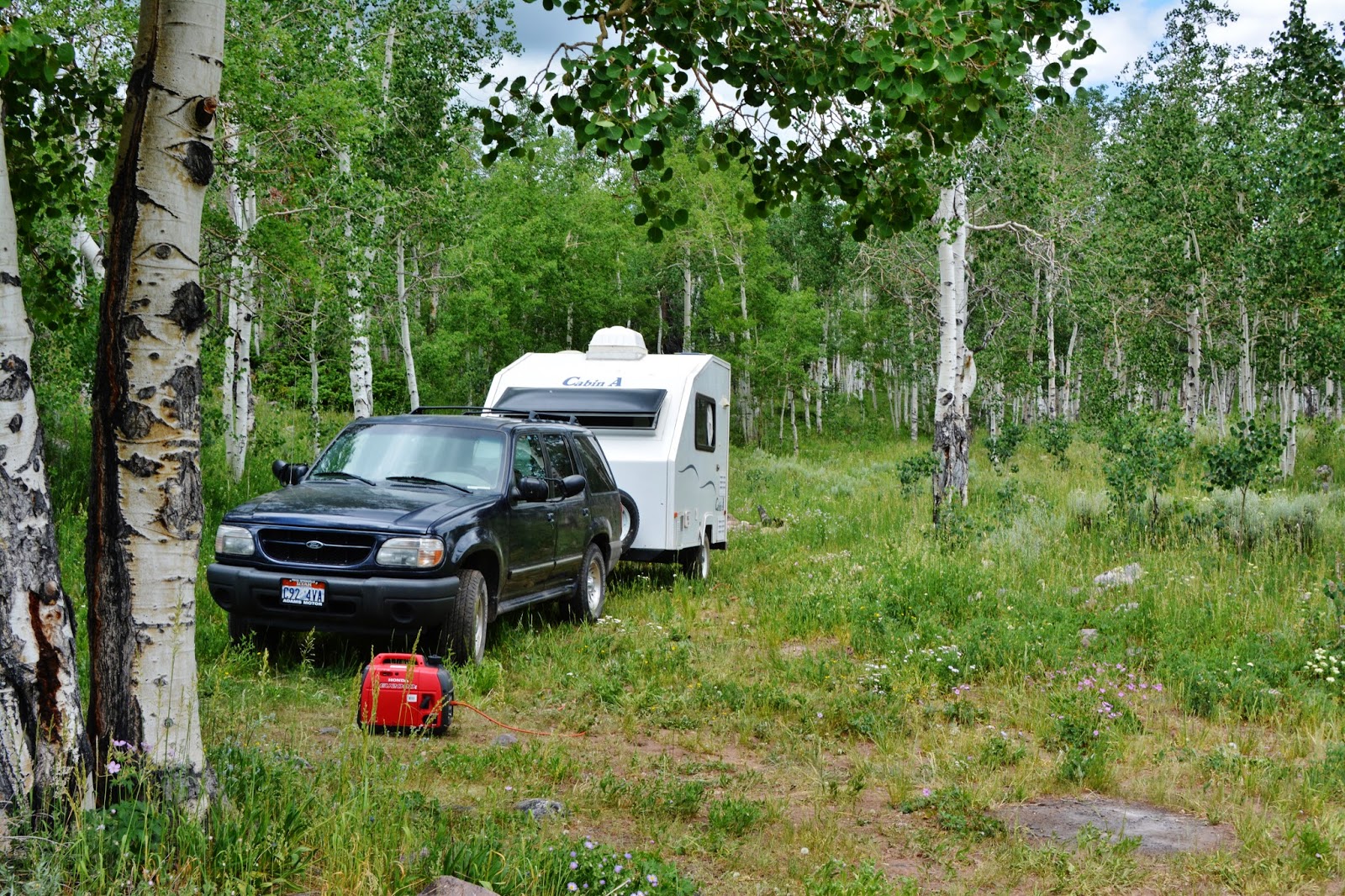 I will persist as best I can and hopefully  continue  getting  stronger
“PICKING UP THE PACE,  LENGTHENING  MY STRIDE &
STRETCHING THE DISTANCES!” 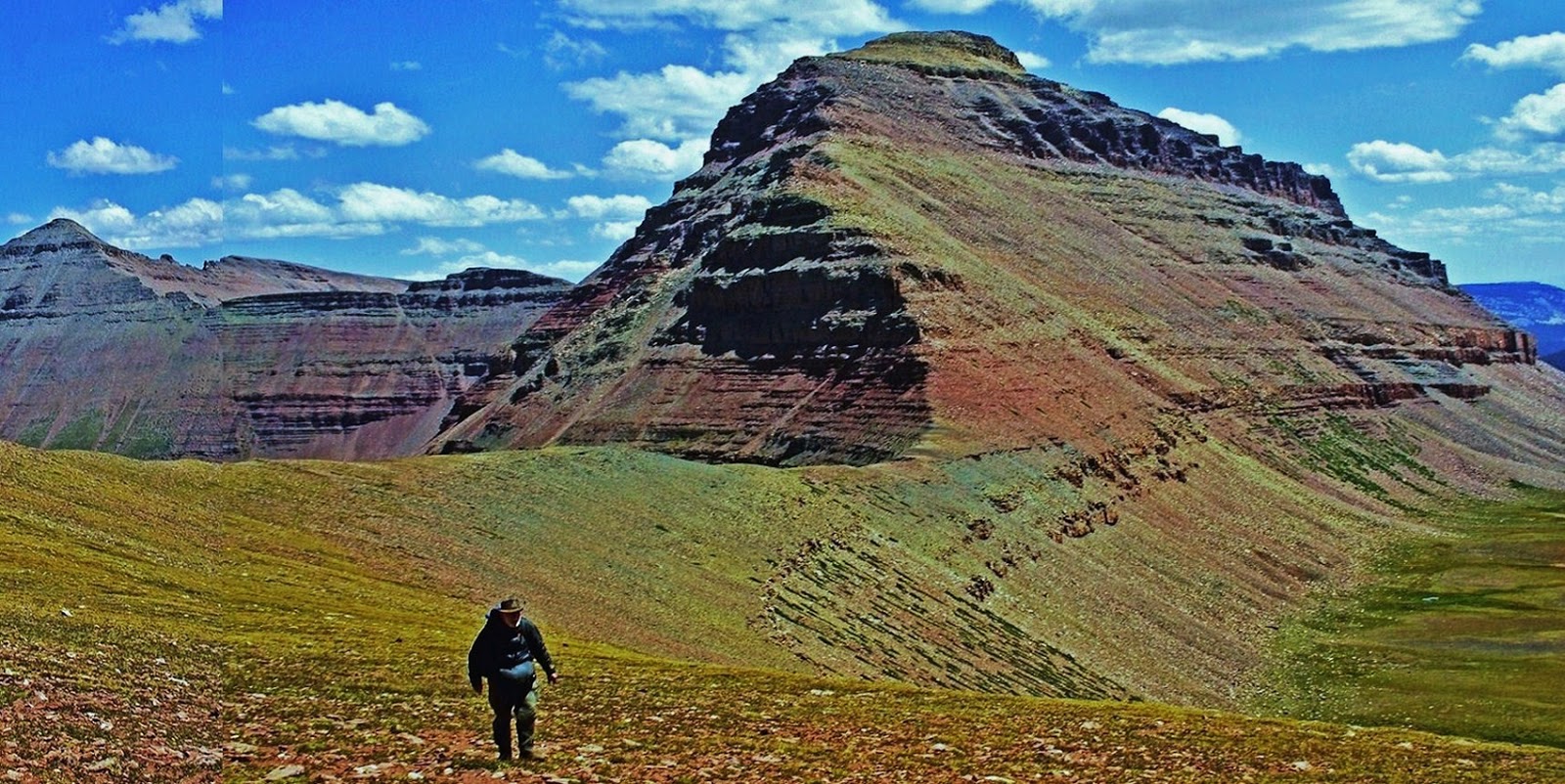 Here you see me on East Fork Pass with 13,219 Mt. Lovenia in the background, which I will likely climb during my Trip #12  through this magnificent area that shows the spine of the High Uintas like nowhere else.

At the end of this post see  possible reactions to these  quixotic  plans.